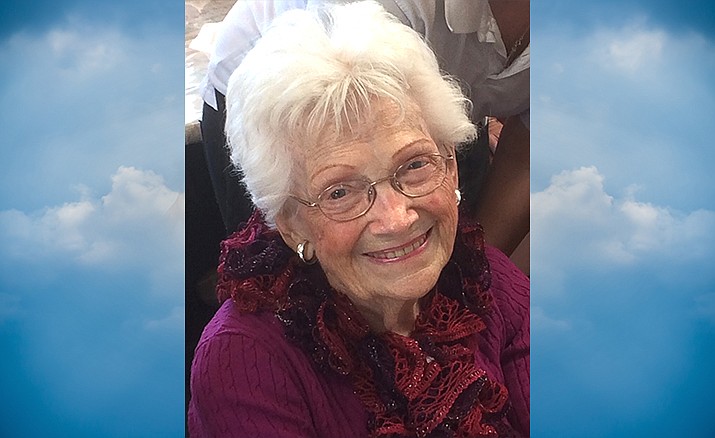 With her passing the world grew dimmer and Heaven became brighter.

Naomi was born November 13, 1923 in Johnstown, Nebraska to Kenneth and Martha Lorensen. It was there as a little girl she made life’s greatest decision of trusting in Jesus Christ as her Lord and Savior.

Her family eventually settled in Oregon where they homesteaded near Mitchell Butte in Nyssa. It was there she met and fell in love with Donald L. Parker to whom she was married for 63 years.

The early years of their marriage saw several moves throughout Oregon for employment reasons eventually settling back to the farm in Cow Hollow in Nyssa. While living and working on the farm both Donald and Naomi were also employed at the Nyssa Sugar Factory.

The family relocated to Sunnyvale, California in 1957. Naomi worked for Lockheed Missiles and Space Division from where both she and her husband retired. Shortly after retiring they moved to Roseburg, Oregon.

The retirement years saw extensive traveling throughout the United States, Alaska, and Canada. One of their travels led them to the Verde Valley in Arizona which was an area she fell in love with. They then relocated and new roots were put down and a new chapter in life began in Cottonwood, Arizona where she resided until her passing.

To know Naomi was to love her. What she brought to her family flowed over to all she crossed paths with. She was a faithful prayer warrior. Her attributes were those of a servant who was loving, faithful, nurturing, compassionate, giving, sacrificing, selfless, and thoughtful -- all of which epitomize this beautiful wife, mother, grandmother, and friend.

She was full of life and always awaiting the next adventure! She could be found dancing, singing in the Verde Valley 100 voice choir, singing at karaoke events, attending church activities, volunteering at the age of 90 at Verde Valley Medical Center, involved with her local Senior Center, and reaching out to those in need.

Up until the last year and half of her life, when she entered a care center due to her health failing following a mild heart attack, she was blessed with an incredible memory and seldom failed to acknowledge a birthday, anniversary, or special occasion in other’s lives.

Naomi was preceded in death by her first husband of 63 years, Donald Parker; her second husband of eight years, Donald Campbell; her sister, Jean Eklund; her brother, Bernie Lorensen; son-in-laws, Dr. Robert Asher and Marvin Thomas; and grandson, Darren Parker. Her eldest son, Ronald Parker, joined them all in Heaven on November 27, 2020 (one week after Naomi passed away).

Due to the pandemic, no memorial services are planned at this time. The family would like to extend deep appreciation to the Haven Care Center in Sedona and to Aviant Hospice in Sedona, who lovingly tended to our mother.

Those wishing to make charitable donations in memory of Naomi may do so to the Billy Graham Evangelistic Association, Samaritans Purse, or Aviant Hospice of Sedona, Arizona. John 3:16; I Peter 1:3