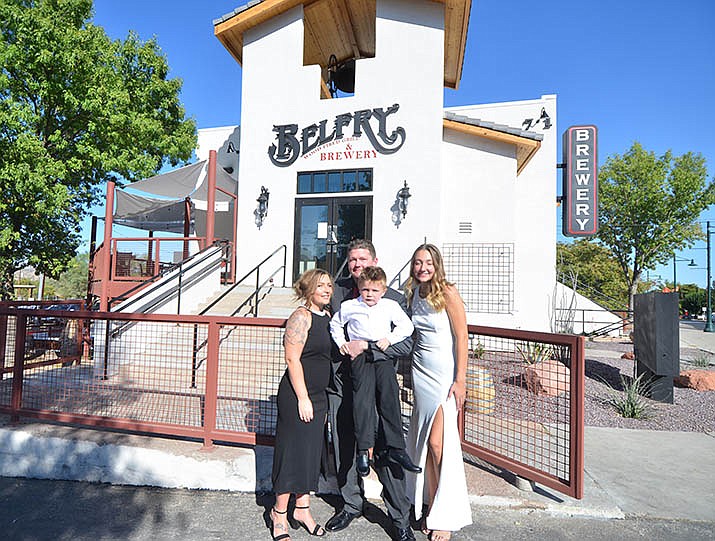 Owner Bob Conlin has created a beautiful building that fits into Old Town’s historic atmosphere. The building was an eyesore at the entrance of town as it sat vacant for years. VVN/Vyto Starinskas

It’s been a while since the sound of church bells have rang out over Old Town Cottonwood.

“It’s got a nice ring to it, huh,” said Bob Conlin standing high atop his new Belfry Brewery in a former church on Main Street Cottonwood.

The new brewpub owner christened the renovated building like a captain launches a new ship.

He cracked a beer can on the stairway; and beer sprayed onto Main Street in Old Town Cottonwood, where the official city logo is: “Heart of Verde Valley Wine Country.”

Conlin paid about $150,000 for the property and dilapidated building in 2014 from the City of Cottonwood. Conlin has been moving through many financial and regulatory processes to get to the point where the building is today, including having the blessing of the State Historic Preservation Office.

Conlin has created a beautiful building that fits into Old Town’s historic atmosphere. The building was an eyesore at the entrance of town as it sat vacant for years.

Another new Old Town eatery sits right next door. Justin Vitarello’s “fojol bros” drive-thru will be along a U-shaped drive behind and in between small buildings at 775 and 777 N. Main Street

Rock star and local businessman Mayard Keenan is also in the process of building a wine playground/tasting room/facility in the former Masonic Temple in the same downtown area.

“The heart of the Belfry is that it’s a gathering place with good food, good beer and good people,” Conlin said.

Conlin said he has five fermenters brewing beer in the basement, which will carry 16 types of micro-brewed beer on tap. Right now they have eight varieties available.

And people who remember the weight room and gym inside the building will be surprised to see a contemporary and elegant bar and dining area.

Conlin thanked his wife, Ashlee, his daughter, Mariah, his partners and contractors, the Cottonwood City Council and former Cottonwood Mayor Diane Joens for “believing in this project.”

He also thanked his team from Bobby D’s Barbecue in Jerome, which he owns, and the 35 jobs they helped create at the Belfry Brewery.

Conlin’s brewpub is at 791 N Main St, Cottonwood. It originally was constructed as a church in 1928 and later became a car dealership, recreation center and a thrift store.