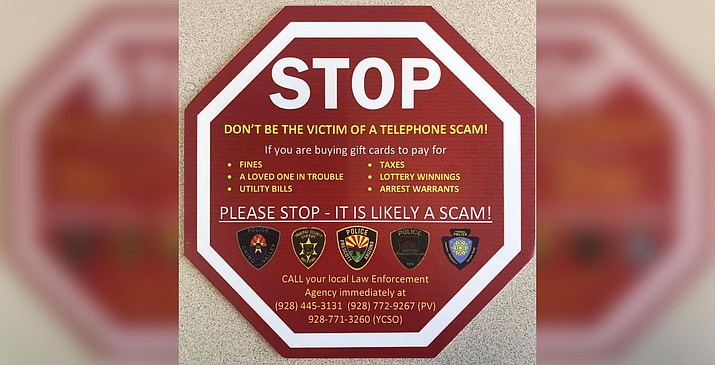 YCSO said, in a news release, a 75-year-old Cottonwood man recently lost thousands of dollars in a gift-card scam.

Between Dec. 13 and Dec. 18, the man received calls from a “Mike McCarthy,” who told the victim his Social Security number had been used for illegal activity in Texas. In order to avoid a warrant for his arrest, the victim was directed to purchase $10,000 in gift cards and provide the card information to McCarthy.

The victim went to various locations in the Cottonwood area and purchased $9,000 worth of gift cards, using a bank card. His attempt to purchase more cards was apparently declined by the bank.

The victim was to ship the money, via UPS, to an out-of-state address as part of an additional payment — all to avoid an arrest warrant.

The victim complied and sent the money.

In the meantime, a deputy implored the victim to stop engaging the suspect on the phone and was reminded that being asked to pay for something by gift cards is almost always a scam.

On Dec. 24, the deputy found out the victim’s UPS package had been returned and was ready for pick-up. The deputy met the victim at his bank so the cash could be returned directly to his account.

The victim also told the deputy a scammer had called on Dec. 21, claiming to work at the Cottonwood Police Department and asking for gift cards “to hold as evidence.”

The deputy told the victim this was likely the same scam suspect.

Unfortunately, the victim complied and purchased 42 separate $500 cards, totaling $21,000 and then shared the card numbers over the phone with the suspect.

Meeting at the victim’s home, the deputy verified this additional loss. A family member of the victim was contacted and asked to intervene and consider a financial power of attorney to prevent further loss.

YCSO’s Fraud Intervention Team has been notified and will assist the victim and family by providing counseling on scams and methods for increased layers of protection. Members of the FIT will also be working with local police agencies to provide “STOP” scam warning signs to businesses where gift cards are sold.

The Sheriff’s Office urges employers to educate employees on what to look for when a customer is likely buying gift cards as part of a scam. These employees are the first line of defense in preventing our targeted senior population from, in many cases, wiping out their life’s savings.