State health director: Only 18% of received vaccine has gone to patients 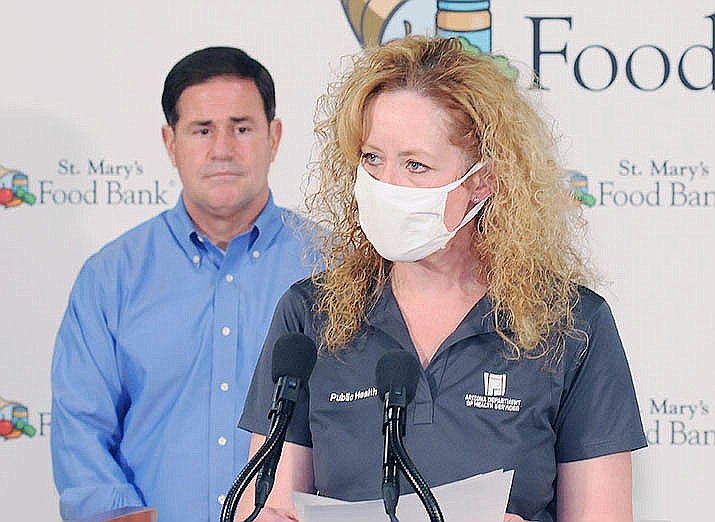 State Health Director Cara Christ, shown here at an October news conference with Gov. Doug Ducey behind her, acknowledged Wednesday that only about 18% of the more than 314,000 doses received by this week actually have ended up in the arms of Arizonans. (Capitol Media Services file photo by Howard Fischer)

PHOENIX - The state is revamping its COVID-19 vaccine distribution system in hopes of getting more people inoculated faster.

State Health Director Cara Christ acknowledged Wednesday that only about 18% of the more than 314,000 doses received by this week actually have ended up in the arms of Arizonans.

Christ said some of that is due to the fact that some of the rural counties are just getting their inoculation systems up and running.

But she conceded that allowing each county to run its own program, with minimal state oversight, has created certain inefficiencies. So now the state will take a more active role in how the program is run, complete with the authority to take possession of vaccines rather than simply pass them along to counties.

The move comes with the blessing of Gov. Doug Ducey who issued an executive order giving Christ and her agency the additional powers.

"Any delay in the vaccine getting to Arizonans, any dose that sits in a freezer rather than reaching the arm of a health care worker or long-term care resident, carries too great a cost,'' the governor said in a prepared statement.

"This is a health emergency, and we need all levels of government and our health system operating as such,'' Ducey continued. "Vaccines don't do any good sitting in a freezer.''

Christ said the new system also should make it easier for individuals to keep informed about when they will be eligible to get vaccinated.

She promised that the state will post information on its website about what is the current stage of distribution. That is critical as people are divided into priority groups based on everything from where they work to age and their own medical risk.

And Christ said her agency will have a single point of contact where any Arizonan can learn where they can get vaccinated anywhere in the state.

But one of the biggest changes is going to be that Christ and her agency will be taking possession of some of the state's allocation.

"Our county health departments really know their community providers the best,'' she said.

Christ said, however, that doesn't always work. She said that companies like CVS and Walgreens, both of which are administering the vaccines throughout Arizona, "need to work on a statewide basis.''

"We'll be allocating some of the vaccine directly to them as it becomes available,'' she said. And that, said Christ, will ensure that each of the vaccination sites being run by those companies have the vaccines they need rather than having to rely on seeking something from each of the 15 counties who have their own allocations.

"We want people to know that when Walgreens has vaccines it's going to be Walgreens across the state and not just the Walgreens in Maricopa or Pima county,'' she said. Christ said the state needs to "really have a consistent approach so that people know where to get the information about when they should get vaccinated, where they should get vaccinated, so that we can target those very vulnerable, high-risk populations and get them done quickly.''

So, for example, the state will have a single website where people can find out when it's their turn.

For example, the current vaccines are being offered to those in what's called the 1-A category. These are health care workers and staffers in long-term care facilities.

What's next is the 1-B group, that includes educators and child-care workers, public safety workers and, recently added, those 75 and older.

That web site, Christ said, will not only say when a county has hit 1B -- each county may be at a slightly different stage -- but provide instructions on how to sign up.

Then there's the question of what people will need.

So, for example, someone who is at least 75 would need a driver's license or other proof of age. For others, it's a little less clear.

"For essential workers it would likely be you attend an employer-based vaccination site,'' she said. "Or if you were going to a pharmacy or using a retail outlet or your physician, you would need to show a badge or some type of proof that you were one of the essential employees.

Christ figures, though, 1-B inoculations are unlikely to start until as many in the 1-A category who want get immunized, something likely to take well into January if not early February.

Still, she said, it's possible that once a county has vaccinated everyone in the 1-A category who wants immunization that it could start offering appointments to those in the next category down

As it goes farther down the priority list, that raises different questions.

For example, the 1-C category includes adults with high-risk medical conditions. Christ said that should not necessarily require a doctor's note to get vaccinated, particularly if a patient is getting the shot in the physician's office.

And state health officials are hoping that by that point there will be so many doses of vaccine available that restricting people by priority won't be an issue.

That leaves the question of when -- if ever -- Arizona will reach the point that enough people are vaccinated or have recovered from the virus to achieve "herd immunity,'' the point at which the threat of rapid spread pretty much evaporates.

"There's a lot of different things that have to come together for us to do that,'' Christ said. But she said she remains optimistic.

"And I think as you look over the next couple of weeks, as we continue to add (vaccine) locations, and as we continue to get more vaccine into the state we're going to see significant increases in the amount of vaccinations provided,'' Christ continued. "And we'll be able to meet that by the summer is what we're hoping.''

The change come as Arizona continues to set new records in the number of beds in intensive-care units occupied by people with confirmed or suspected cases of COVID-19. With 78 new deaths reported Wednesday, that brings the statewide total to 8,718, with more than 512,000 Arizonans having contracted the virus since the pandemic began.