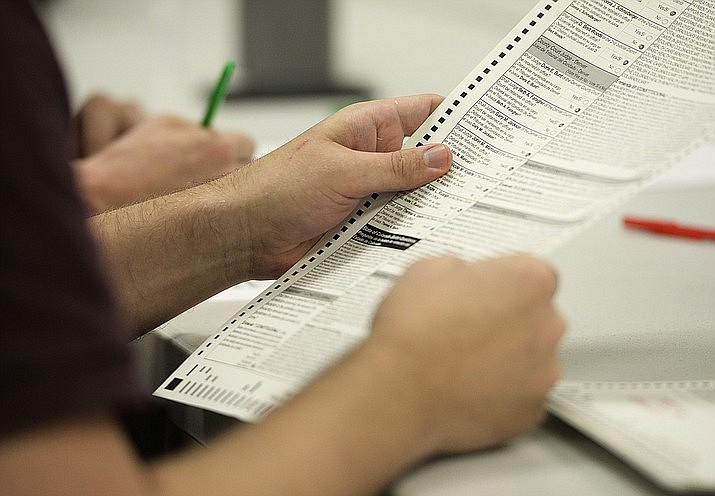 PHOENIX -Attorney General Mark Brnovich is asking a federal appeals court to allow Arizona to continue enforcing the "ballot harvesting" law that a majority of the panel just found unconstitutional.

In new legal filings Friday, Brnovich told the judges that changing the rules now could have a confusing effect. He pointed out that early ballots for the March 17 presidential preference primary start going out this month.

Early ballots go out Saturday; others go out on Feb. 19.

"Once ballots are received, voters can begin voting,'' he told the 9th Circuit Court of Appeals. More to the point, he said that, based on the appellate court ruling, those ballots "are subject to being harvested.''

So Brnovich wants the judges to agree not to enforce their ruling while he takes the case to the U.S. Supreme Court.

It will be just Brnovich who files that appeal.

Secretary of State Katie Hobbs, the state's chief elections officer and a defendant in the original lawsuit, said she won't be joining Brnovich in his bid to have the 9th Circuit ruling reviewed or overturned.

Potentially more significant, an aide to Hobbs told Capitol Media Services that her boss believes that the 2016 law making the practice illegal was enacted with a "discriminatory intent."

"That's one of the reasons she voted against the bill when she was in the Legislature,'' said Murphy Hebert.

That statement could undermine Brnovich's efforts to get the high court to overturn the 9th Circuit ruling.

In declaring the law unconstitutional, the majority declared that "criminalization of the collection of another person's ballot was enacted with discriminatory intent.'' And that, wrote Judge William Fletcher, violates the Voting Rights Act.

The law at issue is linked to the ability of Arizonans to seek "early'' ballots that can be filled out at home and then either mailed in or delivered to polling places on or before Election Day.

But that requirement for ballots to be in the hands of election officials by 7 p.m. on Election Day means that anyone who has not mailed his or her off at least a week ahead of time, depending on where in the state the item is mailed, is in danger of not having the vote count. That has led to political and civic groups going to homes and offering to hand-deliver those ballots not yet mailed in.

The 2016 law makes that practice a felony unless the person doing the collecting is a family member, living in the same household or a caregiver. Supporters said that limits the potential for fraud.

Fletcher, writing the majority opinion, found the law had a "substantial" impact on minority communities by denying them the right to give their ballots to a volunteer. The judges also concluded there was racial motivation in the decision to enact the law by the Republican-controlled Legislature.

The court also noted there was no actual evidence of fraud in Arizona.

Brnovich, in his new filing, does not dispute that. But he instead cited what happened in the 2018 congressional race in North Carolina where the Board of Elections found "overwhelming evidence'' of a coordinated and illegal campaign by the Republican contender and his supporters to collect and then refuse to deliver absentee ballots to be counted.

And that, Brnovich said, shows what can go wrong.

"Fraudulent ballot harvesting thus can -- and probably has -- left hundreds of thousands of voters disenfranchised,'' he said in the new filing.

"Preventing such harms is of paramount importance to the State of Arizona (and all other states),'' the brief reads, saying the court's majority opinion "denies Arizona the power to protect its citizens from the harms that voters in North Carolina suffered.''

Fletcher's opinion does note what happened in North Carolina. But the judge pointed out that what occurred there -- the refusal to deliver collected ballots -- already was illegal under Arizona law before 2016.

Brnovich, however, hinted that perhaps there was some political bias by the majority.

He pointed out that the opinion says, twice, that the North Carolina fraud `was perpetrated by a Republican political operative.'' At the same time, Brnovich said, the majority said that ballot harvesting in Arizona was primarily conducted by Democrats.

"The Supreme Court could easily disagree with the majority's apparent view that the only potential risk of ballot harvesting fraud arises from Republicans and not Democrats,'' the legal brief read.

Fletcher, in the majority ruling, acknowledged that the trial judge had concluded that the Arizona Republican Party has "not significantly engaged in ballot collection as a Get Out The Vote strategy.'' But he said that doesn't tell the whole story.