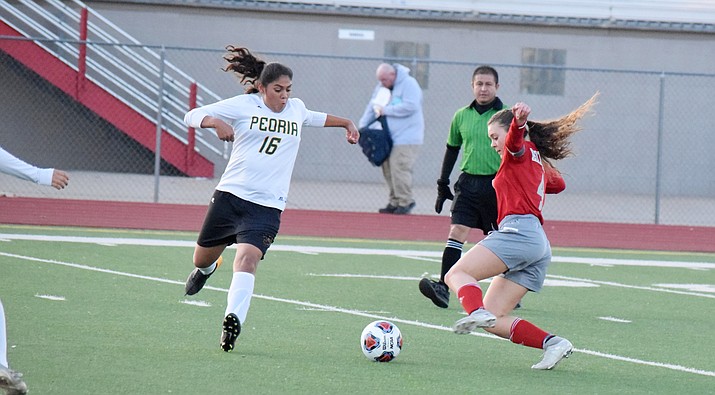 Mingus Union girls soccer took care of business after their mini break and moved into the state’s top four.

The No. 4 Marauders (8-1, 3-1 Grand Canyon) outscored their opponents 5-0 last week to extend their winning streak to eight games.

On Tuesday Mingus Union beat No. 16 Bradshaw Mountain 3-0 at home in their first action since Jan. 17.

On Thursday they beat No. 35 Coconino 2-0 on the road, with Behlow getting a brace. Senior midfielder/forward Marli Urueta assisted on Behlow’s first goal and sophomore defender Brooke Peterson got the assist on the second.

On Tuesday the Marauders host No. 5 Flagstaff at 5 p.m.

Camp Verde hosts No. 26 Northland Prep on Tuesday at 7 p.m. on senior night in their next game.

Camp Verde High girls basketball added to their winning streak with a couple triumphs where they outscored their foes 125-46.

Then on Friday at home CV beat No. 18 Glendale Prep. The Cowboys held the Griffins to single digits in every quarter, including five points int he second, except for the fourth when GPA scored 12.

Up next for the Cowboys is a home game against No. 37 Northland Prep at 5:30 p.m. on Tuesday. It’s senior night.

Mingus Union boys soccer closed out the week by sharing the spoils with Coconino on Friday night at home.

On Wednesday the Marauders travel to No. 4 Flagstaff. Then in their last home game on Friday they host No. 32 Lee Williams.

Up next for the Marauders is a trip to No. 13 Coconino on Tuesday. Mingus Union’s last home game is Friday against No. 20 Flagstaff.

On Tuesday the Marauders lost 57-40 to No. 16 Glendale Cactus at home.

Up next for the Marauders is a trip to No. 12 Coconino on Tuesday. Mingus Union’s last home game is Friday against No. 6 Flagstaff.