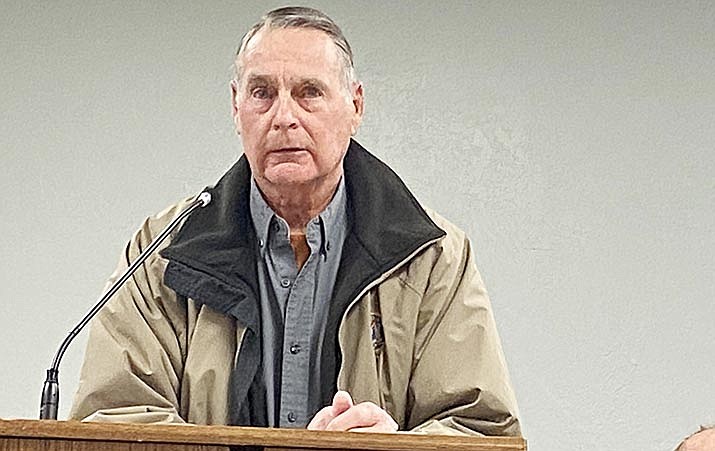 But council, Town Manager Russ Martin said Thursday, still has the opportunity to review the Jan. 8 incident that led to George withdrawing his application for reappointment to the town’s Planning and Zoning Commission.

Martin said he is not yet sure how much money Camp Verde spent in legal fees leading up to George’s decision Wednesday.

But continuing with the complaint he filed on Jan. 13 would have triggered a legal investigation, Town Attorney Bill Sims told council. That investigation, Martin said Thursday, “would have cost even more.”

Mayor Charlie German said that on either Jan. 29 or Jan. 30, he asked George if he would consider withdrawing the complaint, to help the town “clear the deck and get it to where council can discuss this.”

“If you’d be willing to withdraw your complaint, we’ll ask our attorney if that’s acceptable,” German said he told George.

“Council won’t have to decide whether to spend those funds,” Sims said. “Council can police it themselves, in addition to the complaint process.”

German said he and George spoke on two separate occasions about whether the complaint could be withdrawn.

“I’d hate to see the money spent,” George said Wednesday as he withdrew the complaint. “I don’t want to see that happen.”

In a separate agenda item, council directed staff to make changes to attorney recommendations connected to the delivery and dissemination of information in “a minimum amount of time prior to the council meeting so that staff and all council members are aware of the documents.”

A sticking point for council member Robin Whatley was the phrase “a minimum amount of time.”

“We need an exact amount of time,” Whatley said. “Is it two minutes? Is it when we walk through the door? I think there needs to be an exact time.”

A copy of the recommendations are on page 39 of council’s Feb. 5 agenda packet under ‘background information.’

Had those recommendations been in place, Sims told council that the “events of Jan. 8 would never have occurred.”