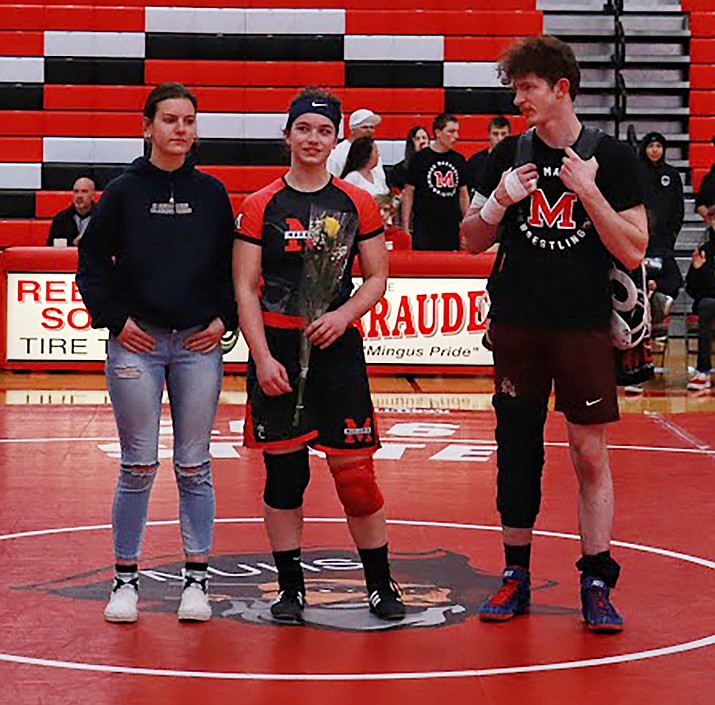 After a successful showing at girls sectionals last Saturday, Mingus Union wrestling closed out the regular season on a high note.

On Wednesday afternoon the Marauders beat Mohave 54-21. Mayer and Kingman were originally going to participate but pulled out.

The Marauders honored seniors Keene Todacheene (120 pounds), Juanio Martinez (152), Zoey Arwine (160) and Ryan Griffin (220). Todacheene didn’t wrestle but will be back for sectionals on Saturday at Payson.

The other three Marauder seniors won by pin though, with Arwine beating a boy .

“So it was a great way to send them off, our last home dual for the seniors, we got a good strong victory,” Mingus head coach Klint McKean said. 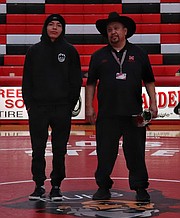 Arwine started wrestling this season and is splitting time with the girls soccer team after swimming in the fall.

“For a first year wrestler it’s been very impressive,” McKean said. “She is such a good athlete but she has a lot of grit and determination. That showed (Wednesday) night in her match. She was winning 5-0 and then her opponent, this boy, he really was cranking hard on a Half Nelson on her and she just refused to turn over where a lot of wrestlers when they feel that pain they kinda roll over and give up a pin but she didn’t and she ended up throwing him on his back a minute later and pinning him. So she’s very strong mentally.”

Townsend also won a section title despite having to sit out until January after transferring from Camp Verde and health issues.

“She’s been battling with health issues all year long and so for her to win the sectional tournament was just a big testament of her desire and will because she could have easily sat it out but she just refused, she wanted to go compete and it was important to her and now she’s a sectional champion,” McKean said. 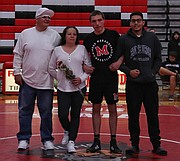 The Marauders had other wrestlers reach the podium but the girls state tournament only takes the top two finishers. There’s also only one division as opposed to the four the boys have, which are separated by school size.

“So although we did have some of our other girls place third and fourth, that wasn’t high enough to send them,” McKean said.

The boys head to sectionals with almost every weight class filled, the first time in years.

“We’ll be sent 13 out of the 14 weight classes and I think we’re set up really well,” McKean said. “I think we’re peaking at the right time of the year, we’re in a good spot mentally, the kids are focused and I think we’re gonna go and just wrestle our best and see what happens.” 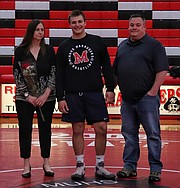