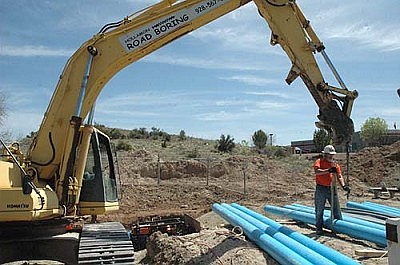 Facing a federal lawsuit, federal officials have agreed to conduct environmental studies before deciding whether to lease out more than 4,000 acres of land near the Petrified Forest National Park for oil and gas exploration. VVN file photo

PHOENIX - Facing a federal lawsuit, federal officials have agreed to conduct environmental studies before deciding whether to lease out more than 4,000 acres of land near the Petrified Forest National Park for oil and gas exploration.

The decision by the Bureau of Land Management ends, at least for the time being, the possibility of "fracking" operations that Taylor McKinnon of the Center for Biological Diversity could have threatened a significant aquifer as well as endangered species and public health in general.

But the deal does not guarantee there never will be drilling in the area. Instead, the federal agency has simply promised to update the environmental analysis "prior to issuing a new decision on the leases.''

"They're back to Square One on this," he said.

"So if they want to do anything with those leases they need to undergo all of the environmental reviews that they were required to have undergone in the first place on this,'' McKinnon said. "They didn't do that."

It was that failure that resulted in the lawsuit last year by McKinnon's group as well as the Sierra Club and WildEarth Guardians.

McKinnon said he believes federal officials realized they had "no chance in federal court'' of winning court, which is why they agreed to withdraw the leases.

There was no immediate response from the U.S. Department of Justice which was handling the case.

At the heart of the fight are some BLM parcels located on either side of the Petrified Forest National Park over the Coconino aquifer.

"As the most productive aquifer in northern Arizona, the Coconino aquifer provides industry, landowners, businesses and municipalities with a dependable supply of water,'' said attorney Elizabeth Potter of the environmental law firm of Advocates for the West. She represents the Center for Biological Diversity, Sierra Club and WildEarth Guardians.

"Millions of downstream water users rely on the Little Colorado River, which flows into the Grand Canyon and feeds the Colorado River,'' she wrote, calling the "reasonably foreseeable impacts'' of oil and gas development here as "staggering.''

"Such development will divert millions of gallons of water from limited local supplies, produce significant quantities of air and water pollution, destroy and degrade the landscape and wildlife habitat, and industrialize this quiet, rural area,'' Potter said. That, in turn, she said, will increase the risk of toxic spills, water contamination, "and will harm wildlife and the people who use and enjoy the lands in the area.''

McKinnon said a particular concern is that the plans for extraction proposed the use of "acid stimulation.''

"It's a form of fracking that uses higher concentrations of acid than hydraulic fracturing,'' he said. "And they're proposing to inject the stuff right above the Coconino aquifer."

McKinnon said he doubts that federal officials will be able to provide the necessary evidence, following environmental studies, that the practice is safe.

"Can they get away with it legally? Maybe,'' he said.

"Is it safe? No,'' McKinnon continued. "It's very difficult to control those chemicals once they're underground, especially when they're injected at pressure."

Potter said it may not just be oil and gas that the bidders are after. There's also helium which is critical to manufacturing, technology and aerospace industries.

She said the federal Mineral Leasing Act reserves all helium produced from federal lands to the government, meaning federal leases generally cannot be granted for the primary purpose of helium production.

"However, helium produced as a byproduct of natural gas extraction may be sold pursuant to a contract with the BLM, subject to federal royalties," Potter wrote.