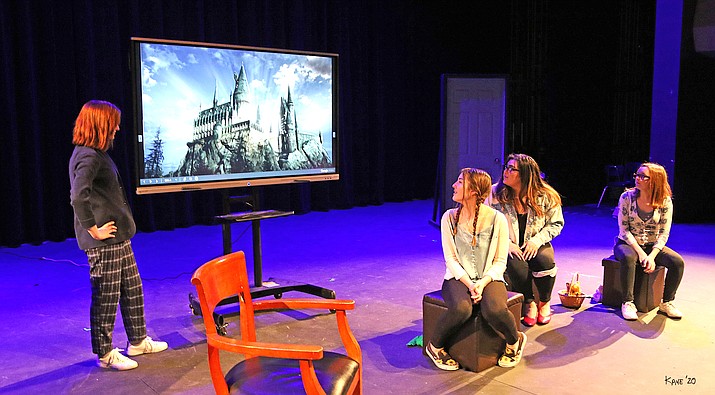 Figments brings some of your favorite literary characters together in ways you’ve never seen them before as they try adjusting to life in the “real world.” Based on the short story Saving Henry by Kaitlyn Gatto, Constellations is a memory play which follows a young woman as she recalls her time spent with her first love.

Red Rock Repertory Theatre is the newly rebranded producing wing of the Performing Arts Department at Sedona Red Rock High School. Led by artistic director and teacher Maxwell Peters, Red Rock Repertory looks to provide students with a strong background in theatre arts as well as ample opportunities to perform and produce shows in one of the most beautiful theaters in Arizona.

This is Red Earth’s second year working with Wendy Lippman (Tlaquepaque owner and property manager) to add live theatre to the current roster of live music and other events.

The third Thursday of each month brings a series of simple stripped-down theatrical performances, featuring local performers and a variety of live forms. Future dates in 2020 include March 19th (a special TBA), April 16th (with Parangello Players), May 21st and June 18th  (a collaborative show with Canned Sedona). If you are a performer with an idea for a show, please contact Red Earth Theatre at info@redearththeatre.org or by phone at 938-399-0997.

A nonprofit company founded in 2013, Red Earth Theatre provides a platform to inspire and nurture many voices through live performance, and encourages dialogue exploring the human experience in our diverse communities throughout the Verde Valley. (For more on Red Earth visit www.redearththeatre.org)

Red Earth Theatre continues bringing live theatre to the Verde Valley with Pink Nectar Café at Old Town Center for the Arts on Feb 29 (7 p.m.) and March 2 (3 p.m.) and a May production of Quilters.