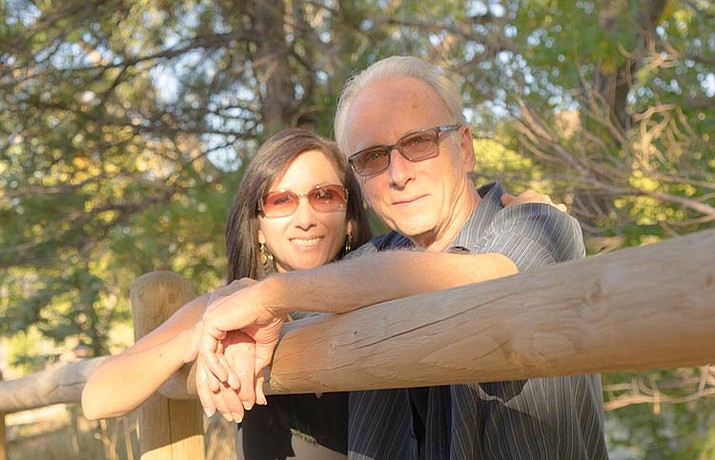 Dan and Yoshi have been making music together for over 25 years.

“Give me a stage and I will give you a show,” says singer-songwriter, and guitarist, JC (Jack Couchman). JC’s music career began in 1974 when he toured the US with original rock n’ roll bands like Black Mariah. JC went solo in 2009, prior to that he was lead guitarist and back up vocals. JC shines as a solo artist, he’s developed a unique musical style, and he is a natural when it comes to writing lyrics.

Dan Rice hosts Sedona’s best Open Mic, every Thursday night. Open Mic is an opportunity to hear professional musicians along with new musicians hoping to break into the music scene, all on the same night. Each musician is allotted time to play, and musicians and audience members get to hear different musicians performing a variety of genres; all music styles are welcome. Musicians are encouraged to arrive early.

Guitar by Robin Bryer. Robin is the owner of the Predator Zip Line (located at Out of Africa) and is also an up and coming Sedona musician. Robin has always loved music and playing guitar. His hobby is becoming more of a passion, and he’s been performing in Sedona music venues. Robin plays guitar and sings at Vino Di Sedona almost every Friday afternoon.

Rock n’ Roll with Life is Beautiful.Singer-songwriter and guitarist KB Bren is a Sedona resident with a life-long music career. In the 1990’s and early 2000’s KB played with well-known bands, such as Grateful Fred and Cold December. KB will be playing his new originals and old favorites with a few covers mixed in. KB, guitar and vocals, is joined by his band, Life is Beautiful – Allen Ferro, drums and bass, and Michael Joseph, guitar.

Saturday Wine Tasting is accompanied by Shawn Johnson, a musician, singer-songwriter, based out of Tempe. His high-energy, soul-filled, acoustic rock sound will draw you in and leave you wanting more. He has played 1000’s of shows and has hundreds of original songs, and plays all kinds of covers. His musical influences include Paul Simon, Jack Johnson, Blues Traveler, Ani Difranco, Barenaked Ladies, Ben Harper, Dave Matthews, and Counting Crows.

Dan and Yoshi have been making music together for over 25 years. Originally worship leaders, Dan played the guitar, keyboards and piano while Yoshi sang, both being involved with a number of different groups. They eventually began to delve into other musical genres, working on songs that they had always loved.

They have now expanded their song list to include various genres spanning multiple eras, and love requests from their highly diverse song list. Now, after honing their craft as a working acoustic duo in Colorado, they have taken their years of experience to the beautiful state of Arizona. You can currently see them performing a unique blend of rock, blues, country, soul, jazz, and pop.

Enjoy a night of music with award winning musician, D.L. Harrison. D.L. was the 2016 Prescott Idol winner and the 2017 Northern Arizona Blues Challenge Winner D.L. is an Arizona singer-songwriter who delivers a high-energy, yet relaxing, rock and blues show.

Rick Busbea has been on the Sedona music scene for over five years, and his lively upbeat shows have given him the reputation of a “must see” musician while in Sedona. Rick plays some originals, but his passion is cover songs to take his audience down “memory lane.” This belief led to the creation of the “Rick Busbea Jukebox” so his audience can pick favorite songs for him to play.

It’s time for KB Bren’s monthly Open Jam Night. This night is becoming one of the most fun events for local musicians to get together and jam. Informal, yet organized, different musicians get together to play and it’s always a rockin’ night.