At ease: Despite national backlash, many support appearance of Pat Tillman statue in NFL ad 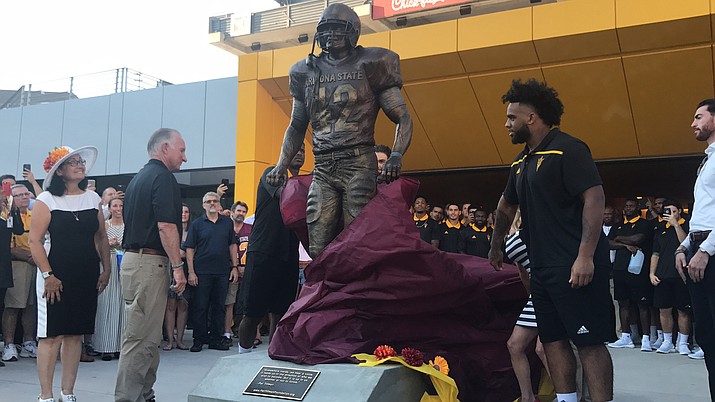 The bronze Pat Tillman statue that stands at the point where players enter Sun Devil Stadium is one of the ways Arizona State feels it honors the late soldier. (Photo by Omar Soussi/Cronkite News)

PHOENIX – A Super Bowl ad by the NFL that features the late Pat Tillman has divided a football community debating its intent.

The statue of the former Arizona State and Cardinals defensive player at State Farm Stadium is part of a commercial celebrating the league’s 100th season.

In it, a young athlete takes the game ball from 97-year-old Virginia McCaskey, the Chicago Bears’ owner, and carries it to midfield, experiencing Forrest Gump-like moments in between. He encounters past and present NFL stars and takes a moment to pause at the Tillman statue.

“It was unexpected and I felt it honored him,” said Kyle Murphy, a teammate of Tillman at Arizona State. “I tweeted out it actually wrecked me like I started crying just because it was unexpected.”

Several national media figures, however, found the statue’s appearance in the ad exploitative.

“The commercial, I thought, was exceptional,” national radio personality Dan Le Batard said on his ESPN show. “And then in the middle of it, they tried to lure us in with that. It was off-putting to me to see that commercialized because what I remember is Pat Tillman’s brother at the funeral drinking and just berating the audience. ‘Don’t tell me he’s in a better place. Don’t tell me about how he’s closer to God.’”

Le Batard felt the NFL was using Tillman’s image to promote its league.

Tillman was killed by friendly fire in Afghanistan after leaving the NFL to join the Army after the Sept. 11, 2001, terrorist attacks. 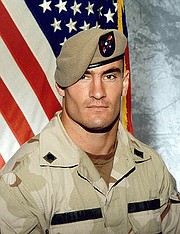 In attention to the Cardinals at State Farm Stadium, ASU also honors Tillman with a statue. Additionally, ASU football players run out before games at Sun Devil Stadium through the “Tillman Tunnel” and wear a “PT 42” helmets decal above their facemasks for every game.

The Pat Tillman Foundation, a non-profit organization founded by his family and friends to carry on his legacy, issued a statement via email saying it had no issue with the placement of the statue in the commercial.

“The Pat Tillman Foundation partners with the NFL to carry forward Pat’s legacy of service and leadership through the Tillman Scholar program. Pat’s inclusion in the commercial celebrating the NFL’s 100-year history is a testament to the way his story continues to inspire generations of football fans on and off the field.”

Former teammate Murphy said he disagrees with Le Batard and those on social media who complained about the ad. He said it is easier to get behind the commercial as well because he said TIllman’s family is in charge of his likeness.

Murphy also said he is not bothered by the use of Tillman’s image as a symbol at ASU.

“Ultimately Pat inspired people when he was alive and he’s doing the same thing now that he’s dead and that’s ultimately what Pat’s legacy is,” he said. “It’s about helping people. … And that’s what I get from what I see. And again, if he is helping to inspire others to reach their dreams and their goals, that to me is what is the most important.”

ASU has worked closely with the Tillman family as it sought ways to honor the fallen soldier.

Among the founders of Pat’s Run, the signature fundraising event to support the Pat Tillman Foundation’s Tillman Scholar program, are Perry Edinger, former athletic trainer at ASU, and Doug Tammaro, a media relations director in the athletic department.

“Pat passed away 16 years ago, and to have that be a moment I think is outstanding,” Tammaro said. “You know, Pat wasn’t an All-Pro every year. He didn’t play for 15 years. And all the people in that video, you got some Hall of Famers in there. And someone took the time to say, ‘You know what, we need to give 10 seconds here to kind of take a step back.’ I thought that was wonderful.”