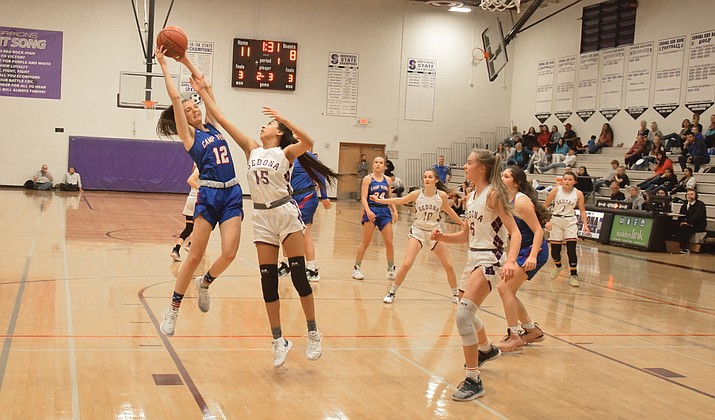 The No. 1 Cowboys (24-2, 10-0 Central) beat No. 39 Northland Prep 62-9 at home on Tuesday. Nine Cowboys scored, led by senior center Jacy Finley, who had 12 points, senior point guard Amanda Lozanilla and senior Tanna Decker who each had 11.

The Cowboys had 15 steals and Finley had four blocks.

Up next for the Cowboys is trip to No. 21 Glendale Prep on Tuesday.

Mingus Union girls soccer bounced back from having their winning streak snapped and moved closer to a first round state tournament game at home.

After the Marauders’ eight game winning streak was snapped earlier in the week, they slid slightly to No. 6. The top eight teams skip the state play-in and host a home state tournament game.

Mingus Union closes out the regular season on Monday when they host No. 21 Scottsdale Saguaro.

The Cowboys (22-3, 10-0 Central) beat No. 31 Scottsdale Prep 56-33 on Friday night on the road. CV held the Spartans to single digits in two quarters, including three points in the fourth frame.

On Tuesday the Cowboys travel to No. 7 Glendale Prep to play a de facto region championship game.

On last Tuesday the Cowboys beat No. 30 Northland Prep 92-68. Collier scored 41 points and sophomore guard/forward Jordan Littlefield had 13 as Salas-Zorrilla had five steals.

Mingus Union closes out the season on Tuesday at No. 28 Lee Williams.