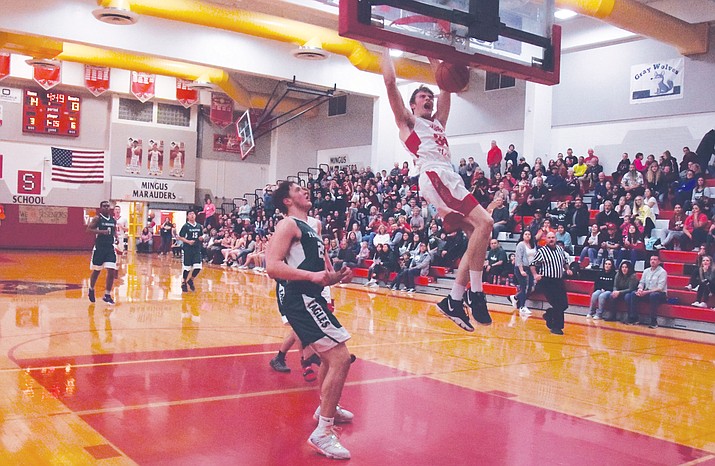 Although they led at the half, Mingus Union boys basketball had their senior night spoiled by Flagstaff.

“I’m just proud of the guys for coming out and playing hard and it wasn’t for lack of effort,” Mingus head coach Albert Rodriguez said. “Flagstaff kinda got hot in that third quarter and that was really the difference. We held off their shooters for much of the game but they had some timely buckets in that third quarter that just got a little separation from us and we just didn’t close that gap.”

Mingus Union led early on, 14-13 after the first quarter and then 23-21 at the half. The Eagles retook the lead at 26-25, a couple minutes into the third period though when a shooter went to the line for three free throws and Flagstaff outscored 22-11 in the quarter.

Mingus Union cut the lead to 10 with about a minute to go but Flagstaff outscored the Marauders 17-14 in the fourth quarter.

“The goal has always been to just get better and be ready to show up the next day and get back at it and our team has done a good job of doing just that and not putting too much pressure on themselves and just coming out and playing basketball and I’m proud of them for doing that and being able to have the character to stay engaged and committed to the team,” Rodriguez said.

On Tuesday at No. 13 Coconino, it was a similar story for the Marauders: the Flagstaff team pulled away after it was close early on as the Panthers won 66-42.

“We did pretty good against Coconino for most of the game,” Rodriguez said. “They have three of the best players in the section and it’s kinda the same thing. We held them off for most of the game but they got hot when they need ‘em and they end up scoring the majority of the other buckets. We just weren’t the better team that night.”

“Honestly I could say the same thing about all five of them and that is that they’re all great kids, great students, work hard and they definitely left a positive mark on the program,” Rodriguez said.

The Marauders close out the season at No. 22 Lee Williams on Tuesday.