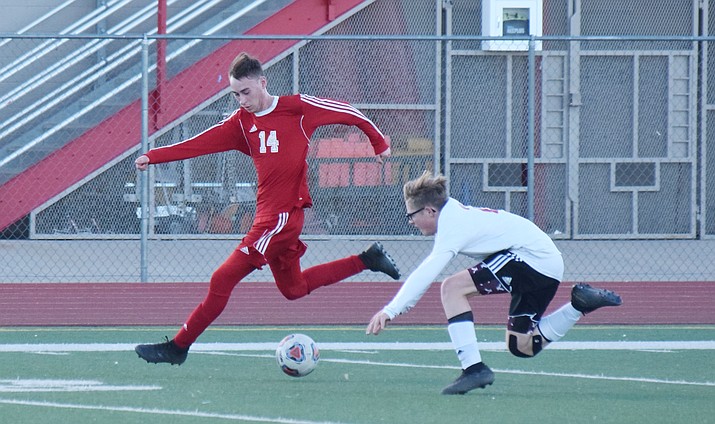 Mingus senior Dustin Bell dribbles past a Volunteer during the Marauders’ 3-1 win over Lee Williams at home on Friday night. VVN/James Kelley

Mingus Union boys soccer closed out the regular season with goals, a penalty kick save and something extra for head coach Luis Hernandez.

After the game the Marauders doused Hernandez with water.

“No, first time and I’m freezing I’m freezing (laughs),” Hernandez said when asked if had gotten the Gatorade bath treatment before. “It feels good, I love these guys and they appreciating me back and I love it.”

When the team met at midfield after the game, a couple Marauders grabbed the Gatorade jug filled with water. After an apparent missed attempt, they got Hernandez with spray from water bottles.

“It was just kinda something last minute where a few guys said it and then when they went to go run and grab it we started grabbing coach and nobody wanted to get wet so we all let go of him and then missed with the water but we got him with the water bottles (laughs), so we still got him with water,” said senior defender Chance Densmore.

“It was fun,” Lazaro said. “I think we played our hearts out. I think the most important thing of this game (Friday) was we had fun. I think most of the season we were just pushing, pushing and pushing and playing hard and playing physical and I think we kinda got stuck in that mental like where you just gotta keep going hard and I think what was for us was just playing and having fun and I think this is why we went out like that and we had fun, we ended the season good, with the dub, you know? Who doesn’t like ending the season with a W?”

In the 45th minute sophomore Marcus Bueno scored Mingus Union’s third goal. The Vols scored their goal in the 60th minute on a penalty kick.

“I thought it was a really good home game and I loved the senior night,” Densmore said. “It’s come a lot faster than I though, this whole year’s flown by but I couldn’t love this team more than I do right now and I think this is an amazing way to end off the year. And if we do continue on to state — there’s a slight possibility still — but if we didn’t I think it’s an amazing note to end on and if we do make it to state I think that this win will definitely help us to move forward and it gave us some stuff to learn from still and I think it’s a great start and launch into next year’s program if we don’t continue on but I couldn’t be happier with (Friday) night’s result.”

Mingus Union came in the game ranked No. 26, just behind No. 25 Coconino and No. 24 Mohave. The 4A postseason features 24 teams.

Coconino closed out their season with a 2-1 loss to No. 5 Flagstaff at home. The Marauders and Panthers drew 0-0 in Cottonwood.

Mohave closed out their season on Friday with a 6-4 win at home over No. 16 Prescott. Mingus Union and Mohave drew 3-3 in Bullhead City.

All the teams leading their regions on Friday night were ranked in the top 14 so if that holds 24th would get into the play-in. Region champions are guaranteed postseason spots.

Hernandez said he don’t know if they’d make the play-in,

“The AIA’s kinda crazy,” Hernandez said. “If we do we’ll appreciate it because we have lots of talent and lots of potential to keep going forward. So we’ll see what happens at the end.”

On Wednesday the Marauders lost 1-0 at Flagstaff.

“That game is just like the past four or five games where we would dominate and lose,” Hernandez said. “This one we didn’t dominate but they attacked, we attacked the scoreboard should have at least been 3-2, 4-3, whichever way we got. We get scored on in the first 20 seconds and that was the only goal that was in. It was a weird goal that got inside our goal and it shouldn’t been a 1-0 game.”

The Marauders closed out the regular season with the win, the narrow loss at the top five opponent in the cold and a draw against Coconino.

“We’re on a hot streak I’d say,” senior midfielder Dustin Bell said. “We started off the season very well and we kinda hit a decline towards the middle of it but we picked ourselves up, we gained confidence and found sort of a calmness within us that made us play together. We trust each other, we care about each other, we have like a brother bond and chemistry that works on and off the field.”