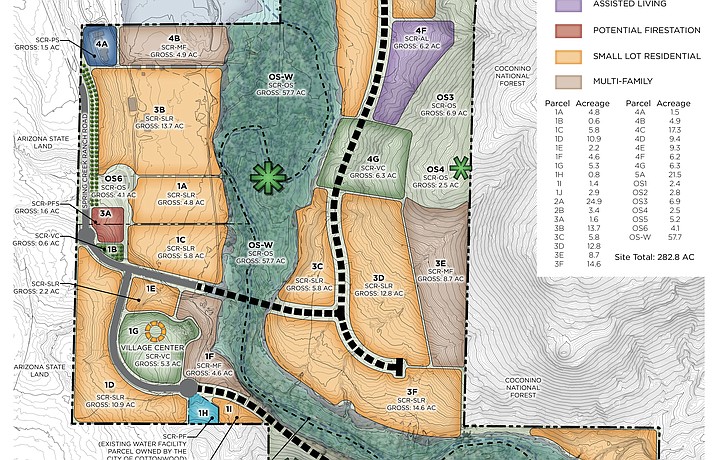 A revised plan has been submitted to Yavapai County Development Services for the mixed-use Spring Creek Ranch development along State Route 89A, which is significantly scaled back from a proposal submitted last fall. However, the new proposal, if approved, would still bring thousands of new residents or visitors to what is now a rural part of the Verde Valley. Photo courtesy Yavapai County.

CORNVILLE — A revised plan submitted to Yavapai County Development Services for a mixed-use development along State Route 89A is significantly scaled back from a proposal submitted last fall.

A revised Spring Creek Ranch plan, submitted by owner/developer Eric Borowsky of Scottsdale, includes 1,500 total single-family manufactured or site-built residential lots, of which as many as 200 lots may be used for recreational vehicle visitors, plus 400 rental units and a 200-unit assisted-living facility.

Borowsky, along with the Ryerson family of Cornville, are devoting a combined 282 acres along Spring Creek, set back along the south side of 89A, north of Oak Creek Valley Estates.

In December, the Yavapai County Planning and Zoning Commission voted 5-4 to recommend disapproval of Borowsky’s first proposed planned area development for the acreage. County Supervisor Randy Garrison had said that even one Planning and Zoning “down” vote on a project raises serious concerns, and another supervisor, Tom Thurman, said publicly he wouldn’t approve it, so Borowsky asked for more time to rework the plan.

Dozens of residents spoke out about the size of the project at a November meeting of the Cornville Community Association, and a public meeting on the Spring Creek Ranch site produced similar negative feedback. Only a handful of supporters of the project spoke at the Planning and Zoning hearing, held in late December, while dozens testified that it was too large and was likely to stress the local water supply.

In mid-January, the supervisors granted Borowsky a non-date-specific continuance on the application. After holding a yet-to-be-scheduled community input meeting, Borowsky can schedule another hearing at a regular Planning and Zoning meeting, with that commission’s recommendation going to the supervisors, who would then vote on final approval.