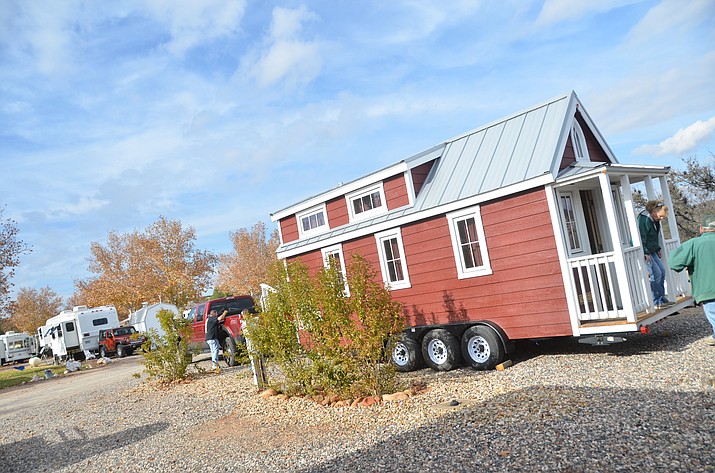 Mobile tiny homes, such as this one at Thousand Trails resort between Cottonwood and Camp Verde, are only allowed in RV parks under Camp Verde’s zoning codes. VVN/Vyto Starinskas

For about five years now, a recurring theme in Cottonwood has been the lack of affordable housing for the everyday Average Joe.

Last week, the Cottonwood City Council finally had a chance to provide a legitimate solution to this ongoing concern.

Council members used the opportunity to find a way to fail at the task. Or, at least kick the can down the road, which is what government at all levels seems to do best.

The council decided it best to send a tiny home zoning ordinance back to the drawing board. The key hang-up with moving forward was over concerns about the compatibility of tiny homes - especially those that are mobile – in traditional single-family neighborhoods. More specific was the concern about the impact these diminutive dwelling sites would have on property values.

As if such a residential mish-mash doesn’t already exist in Cottonwood. There are countless examples where mobiles and site-built homes co-exist as neighbors in Cottonwood, especially Old Town where tiny homes would be a welcome fit. Many of the existing ones are rather tiny already.

What the Cottonwood City Council needs to do with the question of where and how to make tiny homes fit in Cottonwood is to take a good look at what already has been accomplished in Camp Verde.

Camp Verde is solidly clear in distinguishing between tiny homes that are mobile as opposed to those built on a foundation. With the latter, little homes on wheels are relegated exclusively to recreational vehicle parks by conditional use permit or planned area development zoning.

With tiny homes built on a foundation, they are allowed through the town’s normal subdivision process. Case in point is the town’s 28-unit Wee Hollow development made up exclusively of tiny homes.

Camp Verde also allows tiny homes on foundations as infill in any residential neighborhood so long as those homes meet minimum code requirements, which the town has determined can be accomplished in as little as 270 to 300 square feet.

Finally, Camp Verde further allows tiny homes as “alternative dwelling units” on existing developments, which is bureaucratic nomenclature for what traditionally has been referred to as a “mother-in-law cottage.”

Following Camp Verde’s model would be a good starting point for Cottonwood.

Most importantly, Cottonwood should take a page from Camp Verde’s playbook in choosing success over failure when it comes to allowing tiny homes a place in their community.