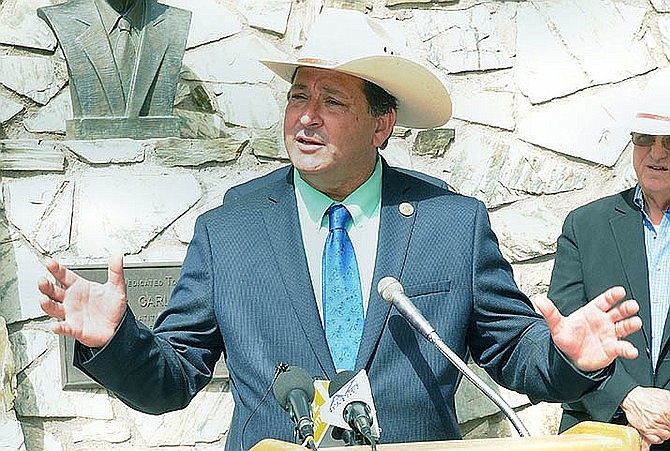 But the question of what fits that definition — and whose culture these items need to be significant to — remain to be resolved.

Rep. David Cook, R-Globe, told Capitol Media Services he introduced his HB 2120 after hearing complaints from Stephen Rae Lewis, governor of the Gila River Indian Community. He said Lewis told him of instances where tribal residents have been denied the opportunity to wear a cap that is decorated with cultural items.

Rep. Arlando Teller, D-Chinle, crafted his own HB 2206 after getting similar complaints.

His measure, unlike the Cook alternative, is a bit more specific, covering both "objects of cultural significance'' and "traditional tribal regalia.'' And it says that includes eagle feathers or eagle plumes.

But while both Cook and Teller said they know what they want to cover, neither could spell out exactly how far the protection would go and who it would cover.

On one hand, Teller said he wants to be as inclusive as possible, covering not just indigenous people but also "Polynesian descent or other cultures that are here in Arizona.''

"As you know, Arizona is a multi-diverse state,'' he said.

"Some of those communities, students are graduating and they have pride,'' Teller continued. "They want to showcase that pride.''

And he said the addition of eagle feathers and plumes was simply an example, not meant to be inclusive. But Teller said he believes the legislation should be limited to "proper significant cultural items.''

Cook, for his part, said he, too, is focused on Native students wearing Native items.

"The problem brought to me was that a high school student was denied the opportunity to wear their regalia that was culturally significant to them,'' he said. "And that's where I think the problem lies.''

Still, Cook acknowledged that the issue -- and the legislation -- is broader than that.

Consider, he said, someone who is of Scot heritage.

"Can I wear my bagpipes?'' he asked. Or even just a kilt?

And that gets back to the point Teller was making.

"And the more people that realize we are that melting pot, the better off we're going to be,'' he said. "I don't like this divide I see today in all realms of all types of things.''

Less clear, Cook said, is whether Native American communities, by virtue of their status as separate nations and treaties with the federal government, has some legal "standing'' to seek exceptions from general rules on graduation attire that those from other cultures may lack.

Then there's that question of cultural appropriation.

Put simply, the legislation defines eagle feathers as items of "cultural significance.'' But there's nothing which says that, say, an Anglo student from back East could claim, under the law, the right to wear them to graduation?

Teller said he's not worried about that.

"First of all, as a white kid from New York it's illegal for you to own eagle feathers unless you have your documentation to prove you have Native American quantum or Native American blood,'' he laughed.

And if it's not an eagle feather with the legal issues that brings?

Teller said such questions may end up having to be decided by the school board even though both his bill and Cook's appear to remove that power from them.

Cook said he believes that the bills, assigned to the House Education Committee, probably need work before it moves any further.

The legislation, in seeking to strip powers away from governing boards, is designed at least in part to keep these decisions from being made on an ad hoc basis -- and one that can be both given and taken away.

Until last year, for example, the Tucson Unified School District required students to ask for permission to wear tribal regalia to graduation ceremonies. That drew objections from some parents and community members.

In May, however, the school board voted unanimously to allow Native American students to wear tribal clothing without first getting permission.