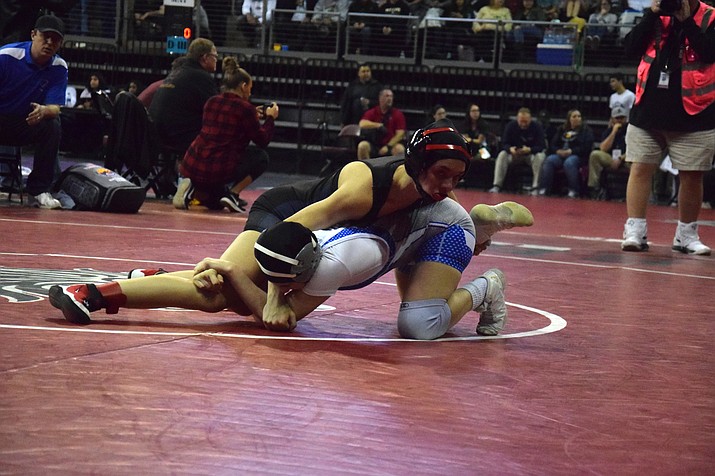 Verde Valley will be well represented at the high school state wrestling championships.

Camp Verde and Mingus Union will be sending 14 wrestlers to the start tournament starting on Friday at the Findlay Toyota Center in Prescott Valley.

Brady opens the state tournament with Cutter Holt (35-14) from Buckeye Union on Friday.

Ryan Griffin has Carlos Gonzalez (26-17) from Tucson Salpointe Catholic in the first round.

Senior Keene Todacheene (25-4) finished fourth at 120 and will go against Shane Landis-Ku (39-9) from San Tan Valley Poston Butte in the opening round.

Sophomore Isaac McKean (34-6) finished second in the 132 pound weight class. In the first round he will face Ivan Matherson (26-11) of Goodyear Desert Edge.

Led by junior Dade Woodard (32-13), who won the 126 pound section championship, Camp Verde had four wrestlers qualify for state at The Odyssey Institute in Buckeye on Saturday.

Woodard has Emory Robles (31-12) from Chandler AZ College Prep in the first round of the state tournament.

Freshman Ethan Zepeda (30-13) took third at sectionals at 113 pounds. He will first wrestle against Jackson McCall (29-6) from Eagar Round Valley.

At 152, sophomore Garrett Dulaney (19-16) finished fourth at sectionals. Dulaney faces Trevor Harris (38-10) of St. Johns in the first round.

The full bracket can be seen here

On the girls side, Mingus Union had two section champions in sophomore Caylee Townsend (3-2) at 101 pounds and senior Zoey Arwine (12-2) at 160 pounds.

Townsend, who wrestled for Camp Verde last year, will face Kylee Gerber (11-5) from Yuma Gila Ridge in the first round on Friday. Arwine will wrestle against Tylee Payne (2-9) of Queen Creek Benjamin Franklin.

The full bracket can be seen here