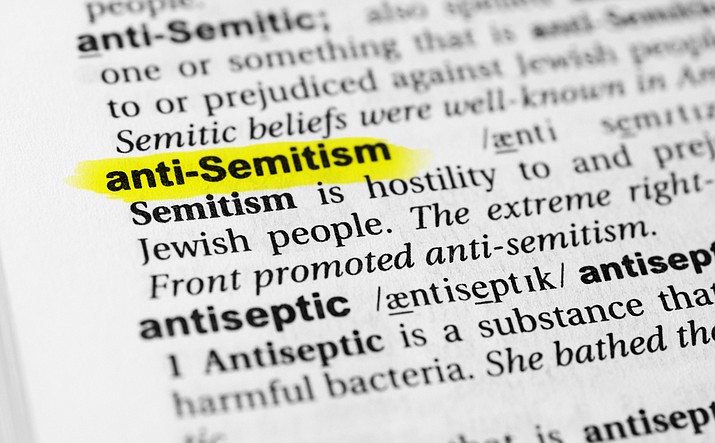 PHOENIX -- A House panel agreed to add "anti-Semitism'' to what is considered a hate crime amid questions of exactly what that includes -- and what that change in state law would mean to those who are accused.

HB 2683 requires the Department of Public Safety to collect information about criminal offenses "that manifest evidence of prejudice based on anti-Semitism.'' DPS already does that in incidents where race, color, religion, national origin, sexual orientation, gender or disability is the issue.

More significant, by adding the term "anti-Semitism'' to the list of items being studied by DPS, it also would automatically add that to the factors that a judge can consider when imposing a sentence. So while anti-Semitism itself would not be a crime, the conclusion by a judge that the person acted with anti-Semitic intent could be used to increase the penalty.

But Darrell Hill of the American Civil Liberties Union told members of the House Judiciary Committee that the definition of what is anti-Semitic is so broad that it would infringe on First Amendment rights.

Hill pointed out that the legislation does not itself define anti-Semitism but instead is based on what was adopted in 2016 by the International Holocaust Remembrance Alliance, complete with examples.

"Some of those examples include applying double standards to Israel, blaming Israel for all political tensions in the region, drawing comparisons between the Israel regime and that of the Nazis including that the existence of the State of Israel is a racist endeavor,'' he said.

Rep. Walt Blackman, R-Snowflake, who, like Hill, is African American, questioned how Hill would see the issue of someone using "N-word'' to someone who is black.

Hill said he doesn't believe the use of that word should be in state statutes either. In fact, he said, that comparison helps make his case.

"In certain contexts, the N-word is undoubtedly racist,'' Hill said.

"But when used by other people, black people for example, it often is interpreted as not being racist,'' he continued. "Context definitely matters in these situations and we can't just say blanket are always racist.''

Barry Aarons told lawmakers of the small group of Jewish men with whom he prays every morning.

"We have to keep the door locked and we have to buzz ourselves in,'' he said amid fears of anti-Semitic acts.

"Sometimes I'm leading services and if I hear a noise it sends a ripple up my spine,'' Aarons continued. "Collecting information about anti-Semitism can go a long way in preventing disastrous anti-Semitic acts.''

HB 2683, however, is not limited to fact gathering, with the change expanding what is considered a hate crime subjecting offenders to stiffer punishment. But Rabbi Sheldon Marx of Temple Shalom in Sun City said motive matters.

He told lawmakers of an incident on Christmas eve three years ago where someone with a truck yanked the large menorah in front of the temple out of the ground along with a Holocaust memorial.

"My community was freaked out,'' he said. And Marx said the temple now is spending more money on security.

But he said this "gray area'' of the law left parishioners unsettled.

"Was this rapscallions doing mischief or was it anti-Semitism?'' Marx said. "If we can get more clear my community would calm down.''

Karolyn Benger told lawmakers of an incident where someone threw a bottle out of a car at her husband and children who were walking to synagogue on a Saturday morning in their Phoenix neighborhood. She said they are "identifiably Jewish,'' with her boys wearning yarmulkes and she covering her head.

"Now I understand that you can't legislate away hate,'' Benger said.

"And I recognize that you can pass bills and what's in people's hearts will stay the same,'' she continued. "But you can take a stand to incentivize that hate can't be acted upon.''

Rep. Jay Lawrence, R-Scottsdale, pointed out to her that it's already a crime to throw a bottle at someone. But Rep. Mark Finchem, R-Oro Valley, said that goes to the issue of the legislation making anti-Semitic acts a hate crime subject to stiffer penalties.

Letter: Honor U.S. code that nation will give ‘to bigotry no sanction, to persecution no assistance’
Film Festival presents New York's 92nd Street Y: Centennial of Anti-Defamation League
Arizona considers cutting off business ties with firms that boycott Israel
UNBELIEVABLE
Letters: Statistics are only as reliable as the statistician
Event Calendar