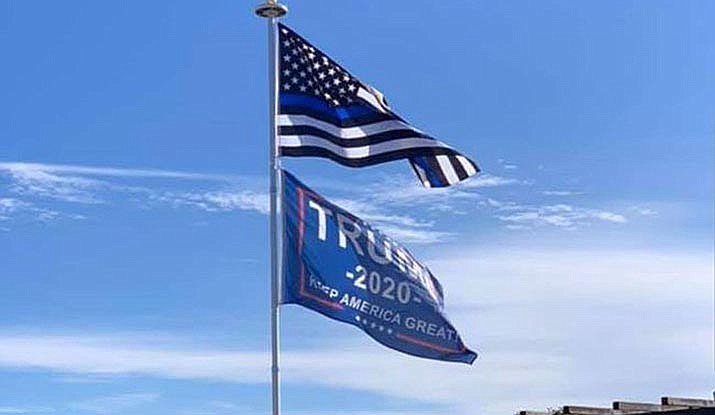 Prescott Valley resident Tawney Baccellia flies this “Trump 2020 Keep America Great” flag under her Thin Blue Line flag on a pole in the backyard of her home in the Viewpoint subdivision. After some controversy, PV’s Planning & Zoning Commission considered whether or not this should be a town code violation during its Feb. 10, 2020, meeting. (Tawney Baccellia/Courtesy)

In front of a near-capacity crowd at the Prescott Valley Public Library Auditorium, the Planning & Zoning Commission on Monday, Feb. 10, approved a zoning ordinance amendment that would allow residents to fly flags with politicians’ names on them.

With a 5-0 vote, the commissioners agreed to submit the amendment to the Prescott Valley Town Council for its own debate and possible vote. The council would have the final say on the amendment. 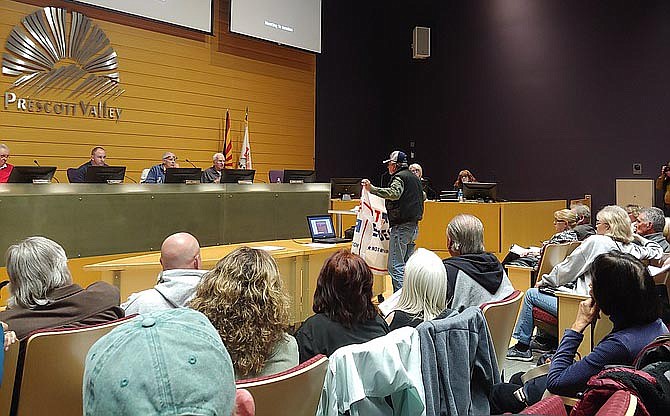 A Prescott Valley resident displays his politically-motivated flag during the public comment period for the Planning & Zoning Commission’s discussion related to its amendment to the zoning code on flying political flags on Monday, Feb. 10, 2020, at the PV Library Auditorium. (Doug Cook/Tribune)

Amendment language adds that election-related flags, such as “Trump in 2020,” may advertise only during election season. State statute considers a political flag to be a sign. However, home owners’ associations can make the amendment’s stipulations more strict if they so choose, town officials say.

The amendment also would allow all manner of flags to be flown on residents’ flag poles, provided those flags do not have vulgar or profane content, town officials added. Restrictions on political signage in front yards, as stipulated in state statute, remain in effect.

P&Z’s Feb. 10 decision stems from a dispute between the town’s Community Development Department and residents whom the department has told to remove political flags from their residential flagpoles.

In these cases, the flags support President Trump. Trump flags have often been flown either with an American flag or a Thin Blue Line flag above them, or in a lower position on a pole next to the American flag.

Community Development Services Director Richard Parker said that the town’s current ordinance regarding political flags will not be enforced until the amendment is either approved or rejected by the Town Council.

Parker said the amendment seeks a balance between the U.S. Flag Code, which states that if another flag is flown with an American flag on the same pole, that a smaller state flag or P.O.W./M.I.A. flag should be flown underneath.

The town’s amendment would allow as many as three flags flown on a property owner’s flagpole, provided they are within a certain size, often up to 3 feet by 5 feet each, to prevent the pole from falling over.

During the Feb. 10 meeting’s public comment period related to political flags and signage, responses ran the gamut, from those who supported flying politically-related signs to those who believed such flags and other political signage should be posted only during election seasons.

This political flag-flying issue is likely far from over. Parker said the town is looking to publish a brochure to clear up the language in the town’s sign ordinance, including the proposed amendment to the PV Zoning Code.