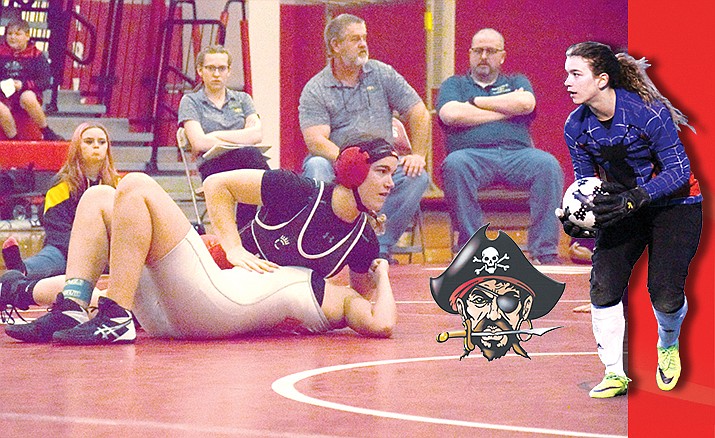 When Mingus Union girls soccer goalkeeper Zoey Arwine decided she wanted to take on a second winter season sport, girls head soccer coach Calvin Behlow knew there would be only one conflict.

It turned out to be the most important day of the season though.

“Zoey is gonna have an epic Saturday,” Mingus head wrestling coach Klint McKean said. “She is wrestling in the state tournament and she’s also playing in the first round of the soccer playoffs. She’s gonna wrestle in the morning in Prescott Valley, come back to Cottonwood in the afternoon and have a game at 3 and then go back to Prescott Valley for the medal rounds at night for wrestling, so she’s really trying to do something that’s never been done before and it’s exciting, I hope she accomplishes everything she’s been working for.”

The first part for the wrestling tournament is Saturday morning at the Findlay Toyota Center in Prescott Valley and then the medal rounds start at 5:30 p.m. The soccer game is going to be 2:30 p.m. or 3 p.m.

“It’s gonna be a lot of anxiety running between Prescott to Cottonwood and then back to Prescott but you gotta do what you gotta do,” Arwine said.

Behlow said he was excited for Arwine when she told him about wrestling but was afraid losing her would sink the soccer Marauders, who are 10-2 and have a top ranking.

“I didn’t want to lose her, I knew that we’d be 6-6 without Zoey and we’d have to score a lot of goals to be 6-6,” Behlow said. “So Klint McKean, he’s my stepbrother, we kinda talked a little bit about how the dynamics would look like and it wouldn’t fit with basketball and soccer, there’s too many practices, too many games but with her playing goalkeeper, a non field position and wrestling only having their meets on Wednesdays and Saturdays, our games Tuesdays and Thursdays, we only ran into one conflict this year. Sadly it’s this week (laughs).”

Behlow said he thinks she’s the best goalkeeper in the region, she just earned honorable mention Grand Canyon Region. In 12 games they’ve given up only nine goals when she’s played and two of those were at No. 1 Prescott.

Conrad Brady, who won also won a wrestling section championship and is her best friend, got her into the sport.

“He’s an amazing wrestler,” Arwine said. “He transferred here from Camp Verde and he’s always been into wrestling and he kinda got me into it, told me I would be really good at it and I gave it a shot and I’m absolutely in love with wrestling.”

This season Arwine said she spent more time in the wrestling room than on the soccer pitch.

“My wrestling coach and I kinda have this joke where I’m a ‘part-time’ wrestler, so being a first-year part-time wrestler, it’s definitely intimidating (laughs) going to state against girls that have wrestled their whole lives,” Arwine said. “I guess that’s part of the reason why some of them fear me because I’m so new at it and so well advanced in my first year.”

Arwine has gone 12-2 so far in wrestling this season.

She’s part of a contingent of swimmers that wrestled this year.

“It was a nice surprise that so many swimmers came out for wrestling this year and we hope that just is a trend that continues,” McKean said. “They are disciplined, they work really hard, their cardio is good, they’re used to that strain on their body, they’re similar to cross country runners. Those wrestlers, swimmers, cross country runners, they have to be willing to push their body to the limit so it’s been great having the swimmers come out.”

After all she’s done in the pool and in soccer Behlow said he wasn’t really impressed with her section championship.

“I figured she’d do that well,” Behlow said. “On the first day I said I guess the only conflict will be the state tournament when you win the title because I know that’s kinda where she’s at Zoey’s never done anything halfway, so that being the case she was either gonna win it or she would decide that it wasn’t for her and I think she evaluated that before she started, she went to a couple camps before she even committed to it, so she wanted to know exactly what she was expecting and I think she just read it well and said ‘yeah I can really excel’ at this and so she went with it.”

After winter sports finish she said wants to join the track and field team.