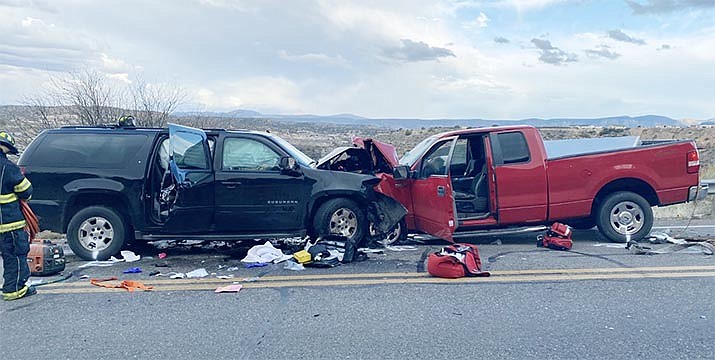 According to the Yavapai County Sheriff’s Office, a 5-year-old Rimrock girl has died of injuries suffered at about 4 p.m. Monday in this collision on Cornville Road, near I-17. Both drivers and the 5-year-old daughter of one driver being taken to hospitals with serious injuries. The mother of the child admitted to first-responders she had mixed medical marijuana with pain pills; no information has been released about whether the mother will be charged with any crimes. YCSO courtesy photo

VERDE VALLEY — Thursday afternoon, according to the Yavapai County Sheriff’s Office, a 5-year-old Rimrock girl died from injuries suffered in a head-on collision on Cornville Road.

YCSO spokesman Dwight D'Evelyn said that the family of the girl, the daughter of a 46-year-old Rimrock woman who YCSO said admitted earlier use of pain pills and medical marijuana, decided to take her off of life support Thursday.

D'Evelyn didn't have any information Friday about the identities or condition of the mother or the driver and lone occupant of the other pickup in the collision, or whether the mother would face any charges. He said toxicology reports have not yet been completed.

A YCSO report said at about 4 p.m. Monday, the mother's vehicle allegedly crossed the centerline along Cornville Road and struck a pickup truck head-on. She was heading east in the westbound lane in her 2012 Chevy Suburban on Cornville Road near Kimberly’s Way, less than two miles from I-17, when the collision occurred.

The 5-year-old girl was in a regular seat in the Suburban instead of a child seat and was seriously injured. The child was transported to Verde Valley Medical Center with CPR underway, stabilized and then flown to Phoenix Children’s Hospital with apparent internal bleeding, YCSO said.

Fire personnel from Verde Valley Fire and Copper Canyon Fire had to use hydraulic tools to remove the occupants from both vehicles.

Both drivers were flown to Flagstaff Medical Center in serious condition with multiple injuries.

Witnesses told deputies the Suburban was weaving earlier on Cornville Road, at Page Springs Road in Cornville, and had crossed over the centerline several times.

Deputies located evidence of drug use in the mother's purse, along with medical marijuana prescriptions.

The YCSO Serious Collision Team arrived to take over the investigation, with assistance from Department of Public Safety personnel.