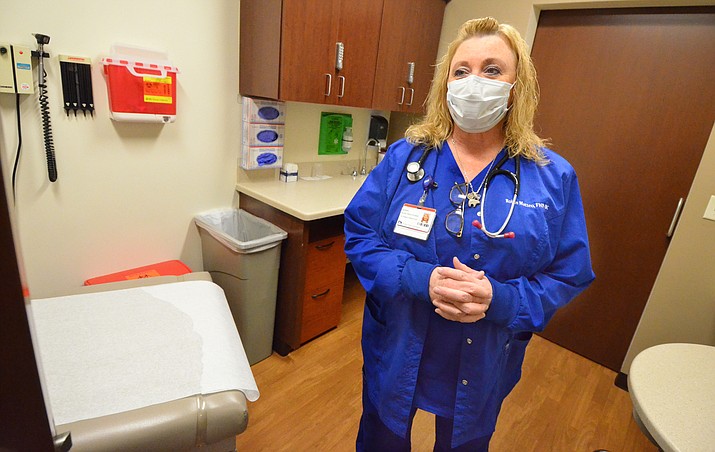 CAMP VERDE - People wearing surgical masks are commonplace in China where they are fighting the coronavirus, but more people in the Verde Valley are wearing masks in an effort to stop the spread of this season’s influenza virus.

Patients coming into the Northern Arizona Healthcare Medical Group’s Camp Verde campus with a cough or the flu are being asked to wear a medical mask while they fill out questionnaires to also determine if they could have coronavirus.

“We haven’t had anybody that we suspected had the coronavirus,” explained Trista MacVittie, NAH chief experience and communication officer. “We’ve just made sure that all our providers are trained and ready and following any Center for Disease Control recommendations and guidelines if somebody does come in,” MacVittie said.

One case of coronavirus has been confirmed in Arizona in Maricopa County, but local residents are being more affected by an outbreak of the common flu, said Robin Matteo, FNP, one of four immediate care providers at the NAH facility.

“We have seen a real increase in flu,” said Matteo, adding that she has seen patients hospitalized from the flu, but no deaths that she knew of. It started in October and it’s a particularly strong strain, she said.

The clinic is seeing two flu strains this season, influenza A and B, and the symptoms with A are more severe than with B.

The family nurse practitioner said that last year was a bad flu season, but this year is worse “numbers-wise.”

“We’re also kind of dealing with the new onset of the coronavirus,” Matteo said. “So we have set up some factors at all the clinics to kind of assess people for risk.”

If the questionnaire leads to a concern, the clinic goes through its protocol and contacts its NAH Infection Control Committee. They may send to another facility or someplace else to be treated so it’s not spread in the community, she said.

That patient would be isolated, explained Lynda Ojeda, NAH practice manager in Camp Verde, so there is no contact with other patients.

“Everything would be done in that isolation room for that patient,” Ojeda said.

This protocol is deployed in medical facilities across the entire United States, MacVittie said, through the CDC.

Matteo has not seen anyone traveling in China at the clinic, but did see travelers and tourists who have been to airports. One had been to 100 airports, but in Canada, Mexico and the United States.

For the common flu or any other medical issue, there is no appointment necessary to be seen at the Camp Verde facility

Tests for influenza A and B at the Camp Verde clinic can be diagnosed within 15 minutes, she said.

If patients are exposed in the first 24 to 72 hours, they can be treated with one of the anti-viral medicines on the market such as Tamiflu. “It lessens the severity, but it doesn’t take the disease away.”

Matteo said this year’s flu is affecting children and adults over 65 more. She also said the flu shots this year may not have been as effective for the younger population. She’s seen people positive for both A and B strains this year.

“Good hand-washing, trying to avoid crowded areas, not touching your face are all good things to do during flu season,” she said.

The last flu season lasted until April, and Matteo thinks this season could run into April again.

Matteo said, if people are compromised with another illness, it’s not a bad idea to wear a mask.

“Our current policy here is for all of us to wear a mask,” she said. “I wear a mask when I am in the clinic with patients.”

Coronavirus (2019-nCoV) was first reported from Wuhan, China, on Dec. 31, 2019, according to the World Health Organization.

“People with 2019-nCoV infection, the flu, or a cold typically develop respiratory symptoms such as fever, cough and runny nose,” said the website.

Arizona State Health officials reported Friday that Arizona’s only case of coronavirus is a male in Maricopa County in his 20s, and recently returned from travel to Wuhan, China, according to Arizona Central. He remains in isolation,

“Every time somebody travels, they bring something back that’s a little different virus that we’ve seen from before,” Matteo pointed out.

Immediate care services in Camp Verde started last May and were added to the primary care facility that opened two years ago, explained MacVittie.

“Immediate care” is walk-in-only, does not require an appointment, is much cheaper than an emergency room or an urgent care visit and the Camp Verde facility is open seven days a week, MacVittie pointed out. They treat primary-care issues without appointments and do X-rays.

NAH also has primary care offices in Cottonwood, the Village of Oak Creek and Sedona, but patients need to call or go on-line and make an appointment, even though same-day appointments are available.

About two-thirds of the patients at the Camp Verde facility come from Camp Verde, the remaining come from surrounding communities such as Rimrock, Cottonwood, Sedona, Cornville and Clarkdale, MacVittie said,

“People are traveling from all over the Verde Valley to come to this clinic,” she said,

Cancer patients to have access to chemo in Verde Valley
5 stars for Verde Valley Medical Center
No flu vaccine for Yavapai County <br><i>At risk must find vaccine through private providers</i>
Coronavirus hits AZ: Officials confirm case in Tempe, one of five in U.S.
Flu hotline set up in Arizona