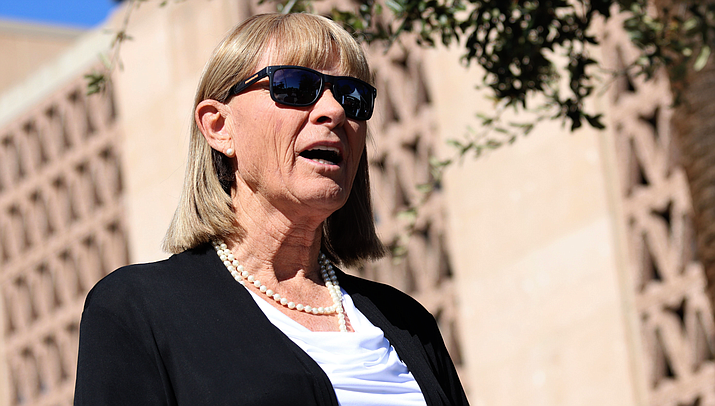 Bobbi Lancaster, a Gold Canyon doctor who underwent gender reassignment surgery in 2010, believes young transgender female athletes do not have a competitive advantage when competing against cisgender females. (Photo by Reno Del Toro)

PHOENIX – Representatives of the LGBTQ community gathered at the Capitol Wednesday to protest a bill that would ban female transgender students from competing in female sports.

The event, tagged “Equity Lobby Day,” was a reaction to a bill proposed by Rep. Nancy Barto, R-Phoenix. The “Save Women’s Sports Act” would require interscholastic and intramural leagues to classify separate co-ed, men’s and women’s sports.

“I don’t see it’s going to accomplish anything because there’s no uneven playing field now,” Gold Canyon Dr. Bobbi Lancaster said. “When it comes to young kids, pre-puberty young girls, whether they’re transgender girls or cisgender girls, there has never been any testosterone in their lives. There is no competitive advantage that’s measurable. And this isn’t me talking, these are experts talking.”

Cisgender refers to someone whose gender identity does not match their sex assigned at birth, according to Phoenix nonprofit one-n-ten.

Lancaster, formerly known as Robert Lancaster, underwent gender-reassignment surgery in 2010 at 59. A skilled golfer, she competed in several women’s tournaments as she considered trying to qualify for the LPGA Tour, a story that attracted national attention.

Protesters were not only outside the Capitol Wednesday but some had the opportunity to speak with state legislators.

With white tents set up around the facility and observers scattered throughout, several speakers took the stage to speak on the matter.

Among them was Maddy Mogan, a young transgender athlete from Tucson who attends Mansfeld Magnet Middle School and competes in cycling tournaments around the state.

“I have an affirming family and good friends as well as a community that supports me,” Mogan said. “Unfortunately, I have so much more that I need as a student, and athlete, and basic human being. It is time for sports to be an inclusive and respectful affirming place for people’s identities no matter what.”

Bill 2706 challenges the language written in the bylaws of the state’s governing body of high school athletics, which state that “all students should have the opportunity to participate in Arizona Interscholastic Association activities in a manner that is consistent with their gender identity, irrespective of the sex listed on a student’s eligibility for participation in interscholastic athletics or in a gender that does not match the sex at birth, via the following procedure below.”

Matt Sharp, the senior council for the Scottsdale-based Alliance Defending Freedom, told Cronkite News in January that the bill would complement Title IX, the 1972 civil rights law banning discrimination based on sex in education programs that accept federal dollars.

However, Dr. Drew Cronyn, a pediatrician for El Rio Health in the El Pueblo Health Center in Tucson, expressed concern about misinformation that was spreading.

“And we know that isn’t true.”