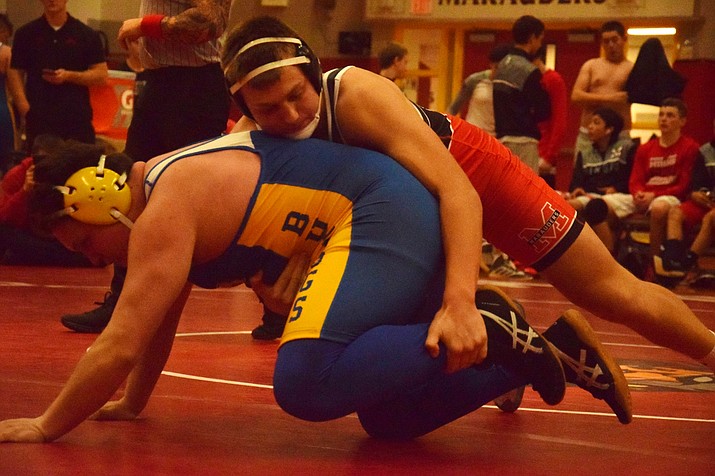 Mingus Union boys wrestling had its best showing at sectionals in years, qualifying eight out of 11 wrestlers for state.

The Marauders finished third at the Division III Section IV tournament, one point behind Coconino for second and 12 points behind Chino Valley.

The eight boys join the two Marauder girls who qualified for the state tournament at the Findlay Toyota Center in Prescott Valley on Friday and Saturday. It starts 10 a.m. on Friday.

“It was a very good tournament,” Mingus head coach Klint McKean said. “A couple matches go different and we win the section tournament and we’re in a great spot for this week coming up on Friday and Saturday, I think we’re gonna do really well. We’re peaking at the right time and the kids are focused, they’re working hard, so we’ve got one more tournament and we’re going to make it count.”

“It’s great, we’ve been working for and towards it for the last year and sometimes you question midseason, when things aren’t going right you question ‘was this last year of full-time hard work worth it’ and then it does show that it is worth it It panned out for us and we’re happy to see the fruits of our labor,” McKean said about the growth of the program.

Senior Juanio Martinez (17-8) finished third at sectionals at 152 and beat a wrestler that had pinned him earlier in the year.

“I think we did really good, we surprised a lot of people, a lot of teams,” Martinez said. “For me it was really cool, my parents were there, they saw, they were real proud, I was real proud.”

Junior Tyler Griffin (18-16) at 182 pounds also finished third at 182 at sectionals and beat a couple wrestlers that had defeated him earlier in the year.

“It’s really difficult because some opponents they out weigh him by 50 pounds or more but he’s tall and he’s strong so that makes up for that weight difference,” McKean said.

The other Marauder boys state qualifiers are freshman Brody Townsend (16-7), who took third at 106 pounds, senior Keene Todacheene (25-4) who was fourth at 120 and sophomore Isaac McKean (34-6) finished second in the 132 pound weight class, he’s returning to state.

Ryan Griffin said the results were expected because of the dedication the Marauders have shown.