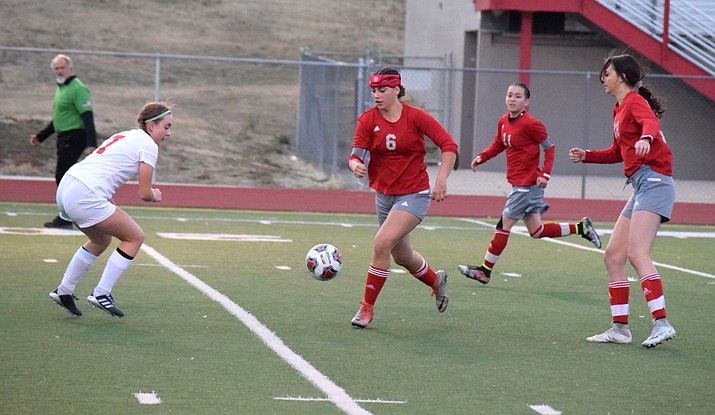 They don’t know who and when they will play yet but Mingus Union girls soccer is opening the postseason at home.

The Marauders earned a top seed in the 4A state tournament. On Tuesday the AIA unveiled most of the rankings, except for the top eight seeds, which included Mingus Union.

“Yeah it’s cool,” Mingus head coach Calvin Behlow said. “Like I said, our team didn’t set up any goals this year knowing that we were in a strong conference, it wasn’t like we felt like we should win the conference knowing that we’re not a Prescott or a Flagstaff or an Arcadia or a Salpointe Catholic. Saying ‘we’re going to win state’ isn’t something that we ever focused on. We just want to play the best soccer every night that we came out and see how it ended up and being 10-2 is beyond our expectations. Hosting a game is phenomenal.”

The postseason starts with the play-in round for teams ranked No. 9 to 24 on Thursday. Then on Saturday the Marauders will host a winner of one of those games.

Arwine is set to compete in the state wrestling tournament on in Prescott Valley on Saturday also.

The Marauders clinched the top spot with a 2-0 win over Scottsdale Saguaro, currently ranked No. 21, on Monday at home.

“We did what we had to do to get a win on a team that’s in the top 20 and put us in a position to have a home game,” Calvin Behlow said. “As far as execution, we weren’t as focused as we needed to be. We could have taken that as an opportunity to be a playoff type game because theoretically going in as a five or a six seed is gonna put us playing one of those teams about that caliber and we could’ve taken it as a really good opportunity but we missed some chances early, kinda put us behind the eight ball. When we finally did get a goal, the pressure kinda let off and we were really lackadaisical, we really didn’t focus like we needed to.”

Flagstaff and Prescott also got top eight seeds. No. 17 Lee Williams, No. 20 Bradshaw Mountain and No. 19 Mohave made it in the play-in, giving the seven-team Grand Canyon Region six sides in the postseason.

“It’s kinda funny when you’re talking to people at the beginning of January when they’re saying ‘you’re 6-1 and ranked fourth, how do you feel’ and I chuckle and say ‘yeah we still have to play the whole region and nobody believes you,” Calvin Behlow said, “and then you go up and have Mohave and Bradshaw and Lee Williams and Coco and Flag and Prescott and next thing you know i anyone of those games we could’ve lost at any point. It kinda bummed me out that Coco just barely got out of the top 24, they were close, I think they ended up 26th, but it just shows that even when you’re losing to our conference, you’re still a good team.”

The state tournament bracket and the Marauders’ seed will be unveiled on Friday at 12:30 p.m. on https://www.nfhsnetwork.com/events/azpreps365/evt04c64435d4