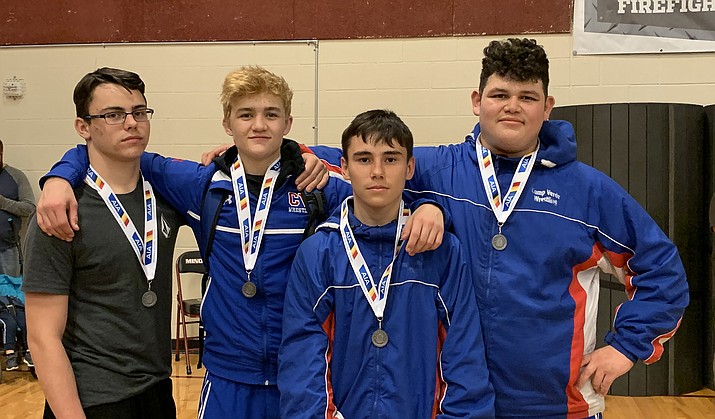 Already young and inexperienced, Camp Verde High wrestling entered sectionals short-handed but still qualified four for the state tournament, many of them rookies.

Junior Dade Woodard (32-13), who won the 126 pound section championship, led the way for the Cowboys at the Division IV Section I tournament at The Odyssey Institute in Buckeye on Saturday.

“I think sectionals went pretty good, we had a lot of small mistakes that can definitely be fixed, especially looking towards next year’s sectionals and state but overall four placers especially some of them being first years I think worked out pretty good,” Woodard said.

“I got my championship and I’m pretty excited going towards state, got a good seeding and I’m just excited for another year to represent Camp Verde and I think it will be a good experience for us all,” Woodard said.

The Cowboys head to the state tournament at the Findlay Toyota Center in Prescott Valley on Friday and Saturday. It starts 12:30 p.m. on Friday.

Senior captain Benji Perez, who was fifth at state last year, tore his meniscus just before sectionals. Then two Cowboys who CV head coach Larry Allred said could easily have qualified for state were academically ineligible.

Dulaney, who played quarterback for the football Cowboys, made it to state after starting the season completely new to wrestling. 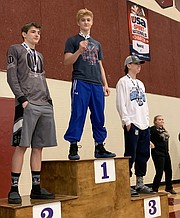 “I think his first like six matches he just got pinned right away and he’s a little frustrated and he said ‘hey coach, I’m just not sure wrestling’s for me I just seem to keep losing,’” Allred said. “I told him I said ‘it’s not like other sports where athleticism by itself can make you good at it, you gotta click. So what I need you to do is stay focused, don’t get frustrated and set a goal that if you work really hard and you practice them, they’re gonna click, they’re eventually just gonna click and when they do, your athleticism is gonna help and I really think you could be a state qualifier and that’s an impressive thing for a first-year wrestler. I know a lot kids at sectionals have been wrestling for four or five years and still didn’t qualify for state, so that’s exactly what happened, his work ethic, his strength, he just paid off He just worked and it clicked at Page, I started seeing him beat more experienced opponents that would’ve pinned him earlier in the year and he was beating them.”

Galvan is also a first-year wrestler and earned his spot on the varsity late in the year.

Allred said the success in getting new or freshmen wrestlers to state is a tribute to his coaching staff that has won a slew of state championships.

“As a head coach I’m pretty lucky because I’ve got just a wealth of talent in the room and you see them take these kids that no knowing about wrestling and just keep them focused, teach them and keep them on track It really is amazing to watch this freshmen, the first-year wrestlers all of a sudden just transform,” Allred said.

The success and work ethic of the new wrestlers excites Woodard.

The Cowboys had 11 brand new wrestlers this year and had 33 come out for the team and ended up with 25 after they had two when Allred took over last year.

“It’s awesome,” Woodard said. “These kids have got some heart and I think even the kids who didn’t make it this year, they’ve got the heart to keep on coming and working towards sectionals next year and it makes me feel good to know that we got a team like that, you know? A team that cares about growing and cares about each other and helping each other grow and I love that as a team.”

Woodard is seeded fourth and could face Emilio Ysquirre (35-2) from Eloy Santa Cruz Valley, who Allred said is pound for pound one of the best wrestlers in the entire division and entire state.

He said their plan is to attack Ysquirre Woodard faces him as wrestlers like that often win out of fear and reputation.