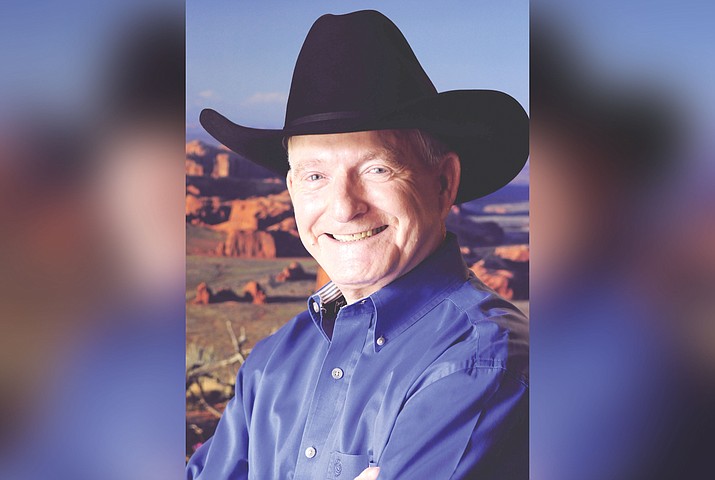 Marshall Trimble has performed throughout Arizona for decades and has become well known across the United States as an ambassador of good will for the State of Arizona.

• What: Marshall Trimble in Concert

Trimble who has been called ‘Arizona’s Will Rogers’ will perform this concert brought to you by the Old Town Center for the Arts. Known throughout Arizona, Marshall Trimble brings history to life with his music and storytelling, delving into the fascinating tales of Arizona and the West.

Marshall Trimble has performed throughout Arizona for decades and has become well known across the United States as an ambassador of good will for the State of Arizona.

Who would have ever thought that a drop out from Phoenix College would become the Arizona State Historian? What a fascinating life, through the back roads of Arizona. This multi-talented historian can deliver anything from a serious history lecture to a stage concert of Western folk music and stories with his guitar.

Trimble has received many honors both as a historian, writer and performer. In 1997, the governor of Arizona appointed him Official State Historian. In 2000, he was selected as one of Arizona’s representatives in the Library of Congress’ “Local Legacies.” Two years later he received the first “Copper Star Award” from the State Society of Arizona in Washington D.C. In 2003 he received the Scottsdale Jaycees “Distinguished Service Award,” That same year he was named a Charter Member of the Arizona Culturekeepers. Marshall was inducted into the Arizona Music and Entertainment Hall of Fame in February 2011.

In 1972, Trimble was asked to create an Arizona history class at Scottsdale Community College and in 1977 began serving as director of that school’s Southwest Studies program.

After publishing his first book in 1977, he used his guitar and songs to liven up promotional book readings. Since then he has hosted several radio shows, including Trimble’s Tales and The Emmy award-winning television show, Arizona Backroads. Additionally, he has appeared on CBS This Morning, Good Morning America, KAET-TV at ASU and the Nashville Network.

Old Town Center for the Arts is honored to present Marshall Trimble, a living legend in Arizona, in celebration of Arizona’s Statehood. Marshall Trimble is one of a kind, and will fascinate and entertain you.

In the spirit of ‘history’ Old Town Center for the Arts co-Director William Eaton will give a brief history of the OTCA theater building, which was constructed in the early 1930’s, as an introduction to the concert. The building has been home to seven religious faiths, an antique store, music store, bike shop, office of the Department of Motor Vehicles, as well as several other uses.

Tickets for Marshall Trimble are $20 advance, $22 door, $25 reserved seating. Tickets are available online at showtix4u.com, and also available in Cottonwood at Mount Hope Foods and Desert Dancer, and in Sedona at The Literate Lizard Bookstore. For more information about upcoming