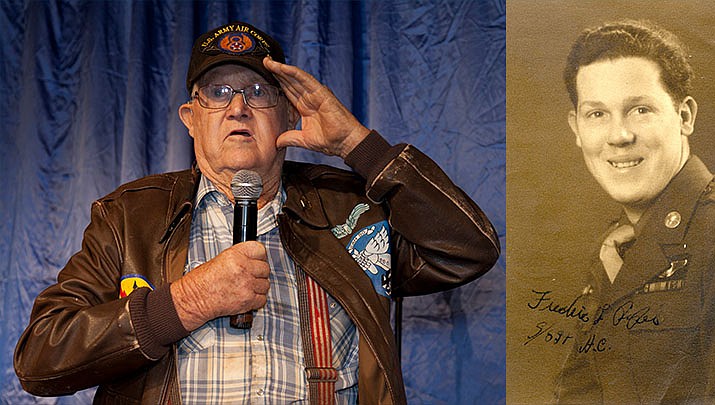 Sedona native Fred L. Piper joined the U.S. Army Air Corp (later the U.S. Air Force) in 1943, flying his first combat mission as a ball turret gunner on a B-17 in October of 1944. Courtesy photos

The Sedona Heritage Museum will host a special presentation Thursday, Feb. 20, 10 a.m., at the Museum when Sedona native Fred L. Piper will talk about his experiences as a WWII ball turret gunner on a B-17 named “Flak Eater.”

Fred was born in 1925 to Sedona homesteaders Lee and Della Piper, the first of five boys. In 1943 he joined the U.S. Army Air Corps (later the U.S. Air Force), flying his first combat mission as a ball turret gunner on a B-17 in October of 1944.

As a gunner Fred was posted on the underbelly of the plane, which was considered a particularly dangerous position when the plane and crew were the targets of anti-aircraft fire.

Fred’s plane was shot down and he was injured. In all, Fred flew dozens of missions over Germany and was decorated for his service.

Besides his own WWII story, Fred will be sharing some information about America’s operation “Big Week,” part of the European strategic bombing campaign against Nazi Germany in February 1944.

This is a free presentation and open to the public.

The Sedona Heritage Museum is located at 735 Jordan Road in Jordan Historical Park in Uptown Sedona and is open daily 11 a.m. to 3 p.m.