County to consider zoning change for 302 housing units in Rimrock 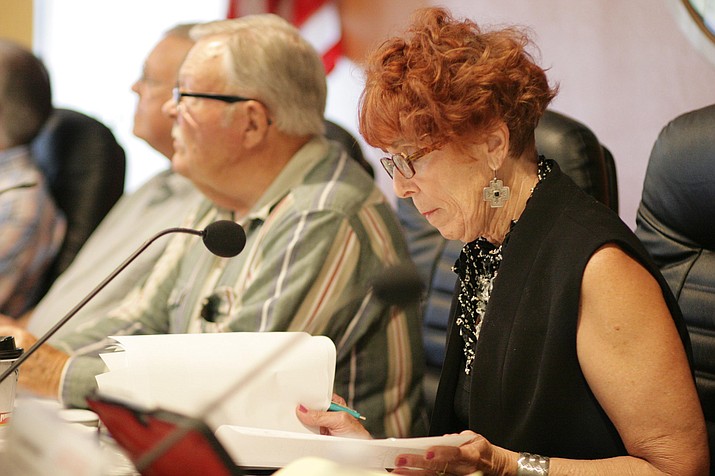 At 9 a.m. Thursday, the Yavapai County Planning and Zoning Commission will consider a zoning map change request to allow for a 302-unit housing project to be built in Rimrock. Pictured, Sandy Griffis, commissioner. VVN/Bill Helm

RIMROCK — On more than one occasion, Rimrock residents have spoken against the proposed 302-unit residential complex known as Primrose Peaks Estates.

The meeting was the one of three held in Rimrock in 2019 as a way of gauging community interest, and to solicit community suggestion.

Thursday, Feb. 20, the Yavapai County Planning and Zoning Commission will consider whether it should recommend that the county’s Board of Supervisors approve the zoning map change application.

The Planning and Zoning Commission will meet at 9 a.m. in the County Administration Center, 10 S. Sixth St. in Cottonwood. A copy of the agenda can be found at yavapai.us.

The commission will consider a zoning map change from residential rural (RCU-2A) and residential single family limited to site-built structures only (R1L-70) to a Planned Area Development zoning district (PAD) that would allow for the development of 64 studio units, 64 one-bedroom units, 102 two-bedroom units and 72 three-bedroom units on approximately 46.72 acres.

The development would be located on the north side of Beaver Creek Road, adjacent to and south of Interstate 17 in Rimrock. This area is northeast of Bice Road less than one mile from the McGuireville/Cornville Road exit off Interstate 17.

According to the commission’s agenda, the county’s Board of Supervisors is tentatively scheduled to consider this zoning map change on March 18.

The Nature of Wildworks

The owner of a Southern California wildlife refuge would like to relocate her non-profit organization to Cornville.

Mollie Hogan is the founder and director of Nature of Wildworks, which houses about 55 animals such as birds, mountain lions and small mammals.

Hogan has requested for a conditional use permit and setback waiver, which the Country’s Planning and Zoning Commission will consider on Thursday.

Planning and Zoning will consider a use permit to allow the wildlife care center in a residential rural (RCU-2A) zoning district.

The setback waiver would be for the side and rear setbacks to allow existing, encroaching unpermitted structures to be permitted according to the site plan.

The structures, according to the commission’s Feb. 20 agenda, was built by the previous owner with an agricultural exemption.

Hogan has also requested a waiver of the requirement for protective screening.

According to the commission’s agenda, the county’s Board of Supervisors is tentatively scheduled to consider this use permit on March 18.