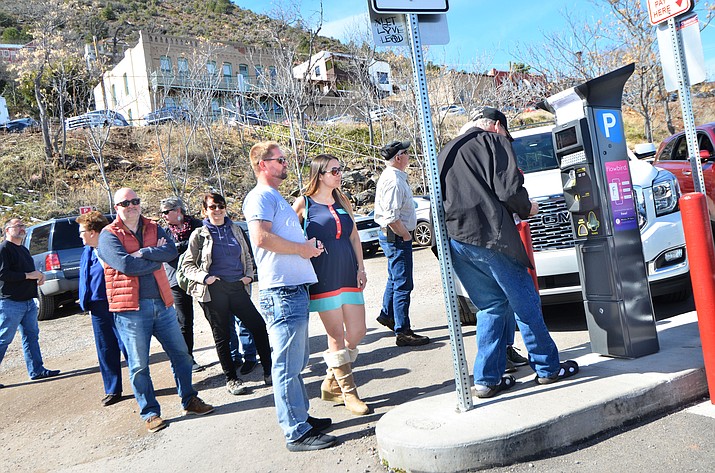 A group of tourists wait to feed the Jerome parking kiosk on Friday afternoon. The kiosks are generating revenue for the town to fix infrastructure. VVN/Vyto Starinskas

The amount of the revenue generated by the six paid-parking kiosks since they debuted last October in Jerome has pleased town officials.

The revenue from the kiosks in November, December and January totaled at least $143,848 if averaged out a year’s period, confirmed Town Manager Candace Gallagher. The three months totaled $35,962 in revenue, after expenses and one-time costs were subtracted.

The council included $125,000 in this year’s budget for gross parking revenue, according to Gallagher adding that “we are very pleased with the results so far. “

“Our heavy months are coming so once we get a year under our belts we will have a better idea. I personally think we will net a higher figure,” explained Jerome Police Chief Allen Muma, pointing out that this average is based on seasonal lows for tourism.

The Jerome Council voted to put in the kiosks in mid-October last year “dedicated by ordinance to improving infrastructure (including streets, sidewalks and water-sewer infrastructure) and public safety,” Gallagher said. “We intend to create a separate fund for this in our FY21 budget.”

The tourist town of about 455 residents put in the kiosks to raise revenue, but the Council wanted to come up with a plan that did not upset local residents and did not alienate tourists.

“Additionally, it is rare to get a user complaining about the requirement to pay, a few complain of the process with the kiosks, which we are attempting to minimize,” explained Muma, who is in charge of managing the kiosks and the parking enforcement.

“If this had been started 10 years ago when it was first proposed, the city would have generated in excess of $2 million. Think of what could we have done with that,” the chief pointed out.

Council Member Jack Dillenberg, who participated in months of kiosk discussions with the other council members, said the kiosks are successful and the revenue is what the town anticipated. One possible adjustment to the program would be adding one more kiosk for cash payments for people without credit cards.

Free parking will continue to be available at the “300 Level” parking lot above the fire station, where free shuttle service is available on Fridays, Saturdays and Sundays.

In addition, there is free parking along parts of Main Street adjacent to shops, restaurants and the Post Office.