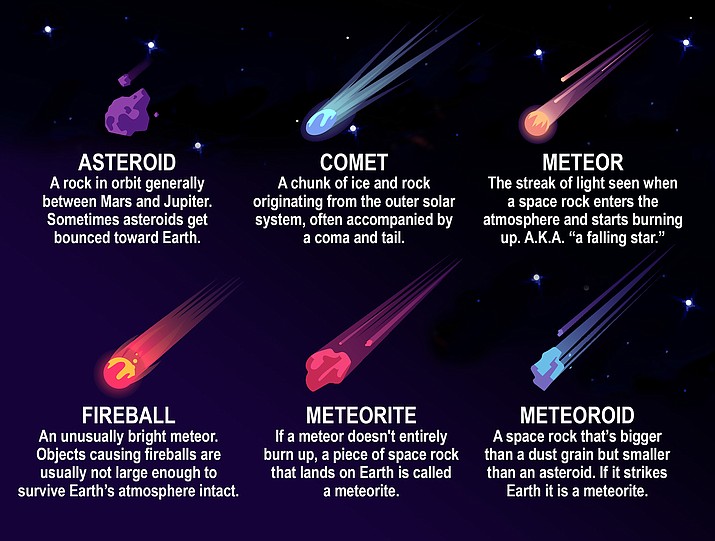 Authorities speculate the explosion heard throughout Yavapai County and the Verde Valley early Sunday morning was "some type of meteor event as witnessed by numerous residents in the area, according to a Yavapai County Sheriff’s Department news release. "A meteor seems to be the best explanation for the loud boom," continued the YCSO report. (VVN illustration)

Verde Valley residents may have shared an extraterrestrial experience Sunday morning when they heard a loud boom from Cottonwood to Camp Verde to Oak Creek Canyon; and the meteorite fragments may be on the ground.

A spokesman for the American Meteor Society Monday confirmed that it was a meteor entering the atmosphere that caused the explosion heard throughout the Verde Valley Sunday morning; and the meteorite fragments may be on the ground.

This backs up the Yavapai County Sheriff’s report Sunday morning suspecting a meteor caused the mystery boom. YCSO pointed out they had received no official explanations for the explosion

“Due to the wide area of witnesses (from Organ Pipe Cactus National Monument to Flagstaff) and the short duration of this object, we are certain that this was a natural meteor that entered the atmosphere high above Prescott,” explained Robert Lunsford of the American Meteor Society based in New York.

The sonic boom indicates that the object survived down to the lower atmosphere and may have dropped fragments on the ground west of Prescott, he said. “I’m certain that meteorite hunters are searching the area west of Prescott,” Lunsford said.

The boom was heard about 7:20 a.m. as people were waking up to their Sunday morning rituals as far away as Prescott.

YCSO reported that dispatchers received calls from every corner of Yavapai County regarding a loud explosion. “Deputies are checking their patrol areas for a possible source,” the YCSO news release stated.

Hundreds of Verde Valley residents quickly took to social media immediately after the boom trying to find out an explanation.

“We heard it in Cornville and felt like the house shook. It woke the husband and that has never happened. He will sleep through anything,” wrote one person on the Verde Independent Facebook page.

“Probably an alien ship going through the sound barrier,” was another post.

YCSO ruled out a sonic boom from any jets flying in the area. “FAA did not have any source information and Luke AFB indicates no jet traffic in the air at that time. We continue to check with other military sources.

“As of now, the source is unknown.”

According to The Daily Courier in Prescott, some witnesses reported seeing a green streak of light shooting across the morning sky.

Some local residents reported unusual events Sunday morning. Monty Cook reported hearing “two booms,” one at 3 a.m. and another a few minutes later. He said he did not hear the noise at about 7:20 a.m.

Kieran DeLander, who lives near Humboldt, observed a large plume of smoke toward Cherry Road.

Unfortunately, Lunsford said the only photos the American Meteor Society currently has received from eyewitnesses are a faint persistent trail that was left in the sky after the fireball had passed, Lunsford said

A half-dozen Prescott residents unsuccessfully searched the Williamson Valley area of Yavapai County for remnants of the meteorite on Monday.

Robert Ward and his wife, Anne Marie, were two Prescott residents who felt and heard the loud boom.

They believe they know exactly what had just happened.

“A space rock entering the atmosphere pretty much right over the house at 22,000 miles per hour,” Ward said.

Ward has been hunting meteorites around the world for about 26 years. Never before had he personally experienced an event like this.

“From my personal perspective, this is a meteorite hunter’s dream come true,” he said. “You always dream of a fall in your backyard, well it just happened.”

Ward headed a hunt for the meteor fragments on Monday with six trusted friends who had some experience in meteorite hunting.

In general, meteorite fragments can range from as small as a pea to as large as a watermelon, Ward said. They are determined to make a find, Ward said.

Some of the rarest meteorites, such as prime specimens from the Moon or Mars, can be worth up to $1,000 a gram, according to geology.com.

Max Efrein and Jesse Bertel of The Daily Courier News Network contributed to this story.