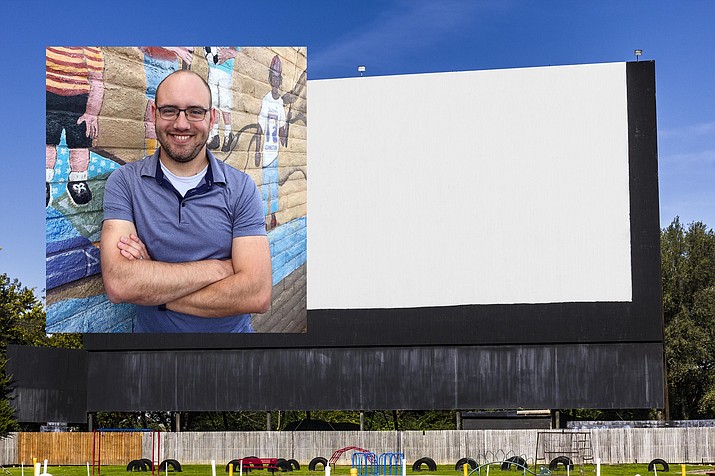 A rather cinematic way to do one’s research.

Although he still waits for a temporary use permit from the Town of Camp Verde, the Cottonwood resident is planning to open a mobile drive-in movie theater on State Route 260 in April.

Called the Verde Drive-In, Meyers said his brainstorm is meant to recapture “what entertainment was meant to be.”

“I’ve seen a stark lack of entertainment options,” he said. “And we need to do something about it.”

Boasting weather that allows for nine months of operation, Verde Drive-In will show classic movies, silent movies, as well as movies six months removed from being first run at your local movie theater.

But it’s the older movies – the classics – that will help set Verde Drive-In apart from the others, Meyers said.

“Retro is back, he said. “People like nostalgia. Boomers grew up with drive-ins, the Millennials and Gen-Xers enjoy life and they’re looking for fun experiences. This will complement the outdoor recreation options we have while providing a theatrical experience.”

“Portable screen, portable sound system, blue tooth, no cabling or wiring,” Lee said. “The projector will be at the screen. Because of all that, because it’s not a permanent facility, they’ll only be there for a few hours.”

Verde Drive-In would be located at the site of the old Steve Coury car dealership, at 6101 E. Coury Dr. The plan, Lee said, is to put the theater on the north side of the property and to utilize the former Coury parking for patrons. The movie screen, Lee said, would face away from the highway to reduce the risk of obstruction inherent with drivers looking at a movie screen while driving.

The property’s owner, Lee also said, would allow moviegoers to use the Coury building’s bathrooms.

According to Lee, a temporary use permit application is not heard by Planning and Zoning, nor by council. Lee said she plans to review the application this week, and that Interim Community Development Director Robert Foreman could approve the application by week’s end.

Temporary use permits are usually for six or 12 months, according to Lee.

“This one, I anticipate us giving them a year,” she said. “Then, they can apply to renew their use permit, which depends on their history, whether they’re a good fit.”

Since inspiration isn’t the same as information, Meyers enlisted the help of Flagstaff marketing firm Mountain Mojo Group to help him understand whether Verde Drive-In could work.

Surveying about 600 Verde Valley residents and analyzing data, Mountain Mojo Group found that 67.3% of respondents indicated that they were interested in attending a drive-in movie at least once a month, another 6.4% would attend a drive-in each week.

More than 60% of respondents said that they’d travel as much as 30 minutes to a drive-in movie, nearly 20% said they would travel at least an hour.

“Our team is confident in the potential of The Verde Drive-In’s success and acceptance in the Verde Valley community,” the survey said.

Only 14 of 600 respondents said they had no interest in attending a drive-in movie.

Meyers said that people should feel comfortable bringing their own food. But popcorn, candy and soda will be available at Verde Drive-In from day one. Down the road, he said, menu options would expand.

“We purchased a truck that we will convert into a food truck,” Meyers said. One of his favorites, nachos, will eventually be on the menu at Verde Drive-In.

“I’m looking into food options to better serve our customers,” Meyers said. “But it’s going to take some time, and some support. This is the food truck before the restaurant. We want to grow into a traditional drive-in with a restaurant.”

‘Here for the community’

Meyers went to his first drive-in movie in 2006, but it wasn’t until August 2018 when he decided he wanted to bring the experience to the Verde.

“People are asking for something for their families,” Meyers said. “I don’t want to wait for someone (else) to do it. I’m here for the community.”

Years ago, Cottonwood had the Valley Drive-In. Meyers plans to bring drive-in movies back to the Verde Valley, showing double-features on Friday and Saturday evenings.

At first he plans for one movie screen, 32 feet, but eventually, two screens for new movies and one screen for the classics. Double features will be on the menu at Verde Drive-In, with initial plans for the same two movies on both Friday and Saturday night. Meyers is also working on audio options in both English and Spanish.

Verde Drive-In already has a website, verdedrivein.com, and a Facebook. Meyers said that patrons will be able to visit the website not only to see what’s playing, but also to request movies, buy their tickets, even reserve the drive-in for private events and private showings.