Life in the Slow Lane: Working on the creek

Christina and I are shifting between her chainsaw and my hand saws and clippers. My fingers ache, my hands are sore, my arms are scratched.

I had an allergic reaction to the mold that seems ever-present at the back end of the property. Christina thinks there's mold because the land is flatter and sandier, which is true. 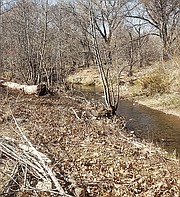 This is the area I call "the beach." She says the sand retains moisture better than the rocky stretches of the banks.

Personally, I think it's the blackberries. Although I've spent years trying to trim those thorny plants into a manageable hedge-like formation, they are forever sneaking and creeping off on their own.

Not even the sheep, who find them pretty tasty, are making a dent in the spread.

Worst of all, blackberries are a vindictive plant: Cut one tendril, and all the others turn on you, pricking, grabbing and generally doing their best to pull off your skin.

I wouldn't put it past them to employ the mold in the soil as a defense mechanism. Despite such deadly hazards we managed to clear another good-sized section, disturbing a small flock of ducks.

The results are that I can see most of the creek from my porch now and watch the sun glitter on the water. That made every sneeze, cough, and hive worth the effort.

I want to report on Rupert. Now six months old, he hasn't gotten much larger, as the dog weighs in at around 40 pounds and only knee-high.

It's certain he'll never reach the size of a Pit Bull, which had me wondering. I went online and did a little terrier research.

It was when I hit the American Kennel Club's page for the Jack Russell -- the taller version of that breed, which might actually be a Parson Russell-- that I stopped searching. There was Rupert -- same spots, same ears, same up-turned nose. Radha doesn't care that her precious chew toy remains small.

But Radha has made a point to share her new toy with her lamb friend, who was happy to include him.

Unlike Radha, who wants to race and chase, Headbutts and Rupert have their own game, one better suited to a smaller dog. Headbutts lowers his head and Rupert chews on Headbutts' horns, then tugs on his ears.

Lambs and puppies. What are you going to do? 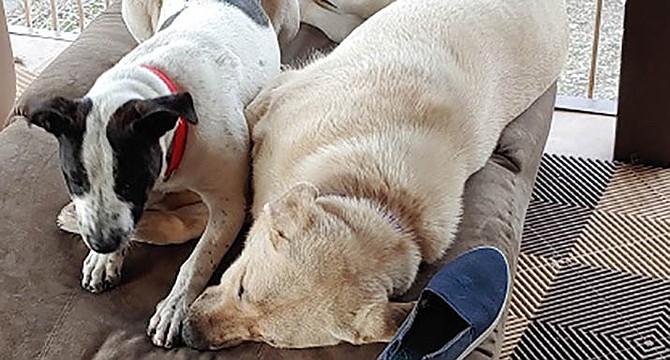