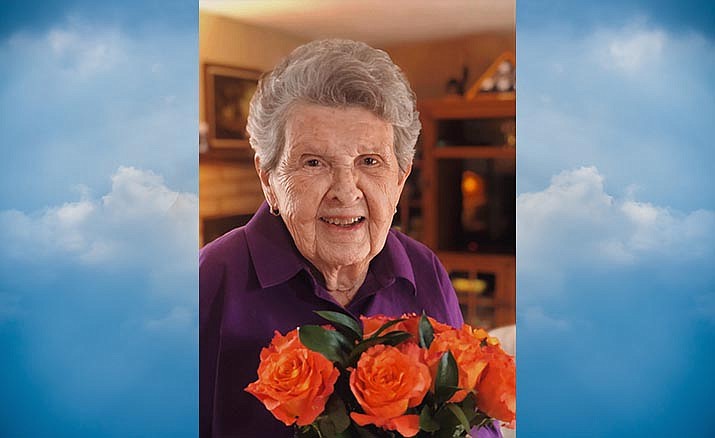 Ruth Marie Busse Oestmann, 95, of Cottonwood, Arizona, was welcomed into the arms of her Lord Jesus on February 13th, 2020. She passed away peacefully shortly after suffering a stroke, with family at her side. Ruth, beloved wife, mother, grandmother, and great-grandmother, was born the youngest of five children on the family homestead near Bird City, Kansas on October 8, 1924 to August Henry and Anna Marie Greisler Busse.

She was raised on the farm, graduating from Bird City High School in 1941. She attended Wartburg College in Waverly, Iowa but returned home after the beginning of World War II to assist her parents on the farm when her three brothers were called into the service.

Ruth met her husband of 70 years, Louis Oestmann, during the war in 1942. They married on September 5th, 1946 after Lou was discharged from the Navy. They began their life together on the Oestmann farm near Auburn, Nebraska but moved their family of three boys to Sandpoint, Idaho in 1956, where their three youngest children were born.

Ruth lived a life of faith and sacrificial service to her Lord, her family, and others. She was a wonderful homemaker, cooking delicious meals for her large clan, maintaining a large vegetable and fruit garden, canning much of the produce, and managing the myriad activities (from sports to music to scouting) of her six children.

Even with a seemingly full house, Ruth and Louis also opened their home to a foster son, whom they loved as one of their own. He remained with the family for three years. Ruth loved singing in church and directed the children’s choir in addition to serving on committees too numerous to count and leading Bible studies.

The abundant sunshine of Arizona drew the family to Cottonwood in 1971. Ruth and Louis acquired a franchise and built the KFC there in 1973, later building two more restaurants in Sedona and Payson. Ruth’s hard work and her expectations of excellence were at the heart of their success. (She was also a stickler for cleanliness; it was said that you could eat off the floor of her kitchen.)

Soon after moving to Cottonwood, Ruth and Louis helped to found Faith Lutheran Church, and Ruth faithfully served as organist for many years. She also began her decades-long service with the Lutheran Women’s Missionary League.

She has been a member of Rock of Ages Lutheran in Sedona for the last 25 years and was still serving as LWML treasurer there at the time of her death.

Ruth and Lou retired for the first time in 1983 and enjoyed travel throughout the U.S. and Canada in their RV. But, even though they were already into their 60s, they began another business adventure together in 1986, opening Ruth’s Hallmark gift store. Fifteen years later they finally retired for good, allowing Ruth more time to volunteer at Precious Stones Preschool, which she continued to do until into her 80’s.

Ruth was able to still live independently in her home until the time of her death. She drove a car until she was over 90, the age at which she was greatly annoyed to receive her one-and-only-ever speeding ticket, thus ruining her perfect lifetime record of no infractions. She loved doing daily crossword puzzles to keep her mind sharp and was still hosting Bible studies weekly in her home. She will be remembered for her kindness and faithfulness to others, her work ethic and integrity, and her legacy of wisdom and love for her family.

Her husband, Louis, and her siblings (one sister and three brothers) preceded Ruth in death. She is survived by her five sons, Dale (Fran) of Pine, Ariz., Roger (Chris) of Post Falls, Idaho, Tim (Debbie) of Manchaca, Texas, Joel (Jana) of Sedona and Kevin (Jamie) of Gilbert, Ariz; one daughter, Lisa (Neil) Rosenow of Cottonwood; and foster son, Eldon (Brenda) Porras Ill. and his family of Wolf Point, Mont.

In lieu of flowers, memorial donations may be made to Precious Stones Preschool at Rock of Ages. An online guestbook is available to sign at www.westcottfuneralhome.com.