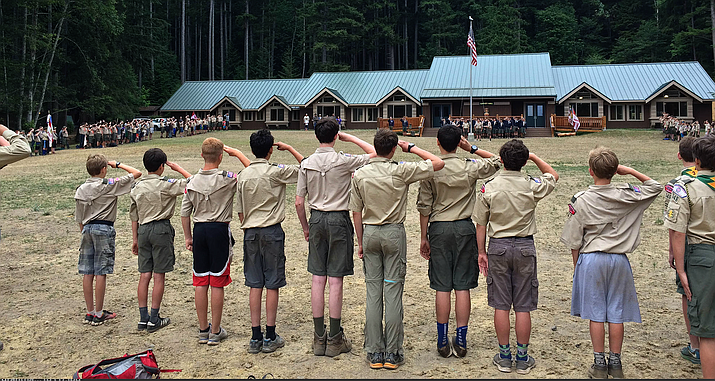 Scouts at a camp in Washington in 2015. The Boy Scouts of America, faced with up to $1 billion in potential damages from sexual abuse lawsuits, filed for bankruptcy, but Arizona officials said Scouting on the state and local level will not be affected.. (Photo by Richard Sprague)

PHOENIX – Arizona officials said Boy Scouting in the state will not be affected by the Boy Scouts of America’s decision to file for bankruptcy Tuesday as the national group grapples with up to $1 billion in damages from decades of sexual abuse lawsuits.

Andy Price, CEO for the Scouts’ Grand Canyon Council, said the bankruptcy will allow the national organization to compensate victims of what he called “historical incidences” of abuse while allowing Scouting activities to continue.

While any incident of sexual assault is horrific and incredibly sad, he said parents need to know “Scouting is very, very safe” now.

“There is no reason to expect that any services would be impacted to our local Scout troops, our camps, our programs,” said Price, noting that councils in the state are legally and financially independent from the national organization.

The BSA said in a statement that it will use the Chapter 11 bankruptcy to create a trust fund to provide “equitable compensation” to victims of abuse while they were Scouts. The organization said in 2018 that it has a “social and moral responsibility” to compensate victims of abuse.

“We are outraged that there have been times when individuals took advantage of our programs to abuse innocent children and sincerely apologize to anyone who was harmed during their time in Scouting,” Tuesday’s statement said.

Expert witnesses have testified to evidence of more than 12,000 victims of abuse from 1944 to 2016. The Scouts said in their statement Tuesday that about 90% of claims stem from incidents around 30 years ago.

While the bankruptcy will allow the Scouts to move forward, one advocate worried that it reduces the suffering of the victims.

“My heart weeps for the victims of the Boy Scouts of America because many of them are going to feel like data,” said Kathryn Robb, executive director of Child USAdvocacy and a survivor. She does not believe the BSA has been completely transparent from the beginning.

“I don’t believe that they were really 100% earnest in their saying that they want to support victims,” she said. “I think they were basically forced to.”

Robb said the Boy Scouts of America will move on, but victims “live with their pain and their scars in perpetuity” and could “lose their personal voice in their journey to justice in a bankruptcy filing.”

But Price said that bankruptcy “is the direction that they frankly have been forced to take,” as the national organization worked to meet its goals of fairly and equitably compensating victims while continuing Scouting activities.

There were more than 38,000 youth registered in 1,700 Scouting units in Arizona in 2018, the latest year for which numbers are available, and almost 18,000 registered adult volunteers in the state.

The decision to declare bankruptcy comes as more states, like Arizona, are changing laws that have kept victims from filing claims that they were sexually abused as children. In 2019, Arizona was one of nine states to pass laws expanding that statute of limitations on old cases, limitations that were an “arbitrary barrier to justice,” said Will Laird, state government affairs officer with the National Children’s Alliance.

“It’s very common for victims of child sex abuse to not come forward and report that abuse until well into adulthood,” Laird said.

But under Arizona’s old law, a victim had to file a claim of childhood abuse by age 20 or sooner. The Arizona Child Protection Act passed last year gives victims until age 30 to file suit against their abuser or the entity that should have prevented the abuse. The law also opened a window, until Dec. 31, 2020, during which victims who are older than 30 can file a new claim.

Laird said Arizona was not alone in passing “window legislation” to revive expired claims, with 16 states and the District of Columbia now having such laws.

“It’s important to provide victims any sort of pathway to justice and healing and to take steps to combat institutional abuse,” Laird said.

Robb said social and medical data show that abuse “silences” children, which is why many states are reforming their statutes of limitation for young victims. She said claims that the new laws would result in an avalanche of cases just hasn’t happened. What matters is “victims have a right to justice,” she said.

The Boy Scouts currently require youth protection training and background checks for all adults and have policies prohibiting one-on-one interaction between Scouts and staff. Any abuse must be reported to law enforcement and any individual accused of abuse must be removed from the organization, according to the organization’s youth safety page.

Price said in the 15 months he has been at the Grand Canyon Council, there have been two allegations of inappropriate behavior: One, found to be a misunderstanding between a youth and a leader, was later retracted and the other was a bullying claim between Scouts.

“The future is bright,” he said. “And as challenging as things will be for the national organization working through this bankruptcy filing, that’s a good thing for our organization because it’s going to allow us to put these horrific events from the past in the past and move forward.”