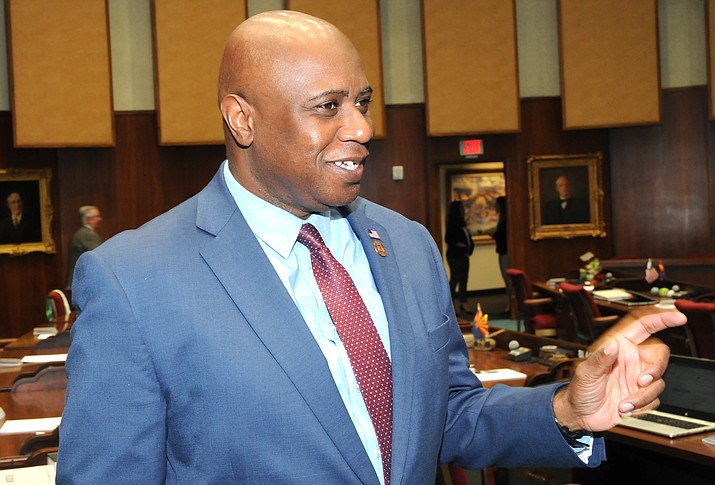 PHOENIX -- A House panel took the first step Wednesday to what would be a major reform of the state's sentencing scheme.

HB 2808 would allow inmates convicted of non-violent crimes to be let out of prison after they serve as little as 65 percent of their sentence. Current law precludes release before 85 percent of a sentence has been served.

The early release proposed by Rep. Walt Blackman, R-Snowflake, however, would not be automatic.

Inmates would have to complete a "major self-improvement program'' or, at the very least, participated in specified work programs for at least six months.

Wednesday's unanimous vote of the Judiciary Committee vote is in some ways a sea change in Arizona penal philosophy.

The state's current policies on incarceration date back to 1978 when lawmakers voted to impose mandatory prison terms for certain crimes. And in 1993 they approved "truth in sentencing'' law which says criminals must serve at least 85 percent of their term before being eligible for release.

Legislators took the first tentative steps last year, approving a proposal by Sen. Eddie Farnsworth, R-Gilbert, allowing release of inmates after they served 70 percent of their sentence. But that is available only to those whose only crime is a non-violent drug offense.

The Department of Corrections reports that between the time that bill took effect and Feb. 2 -- the most recent figures available -- 688 inmates have been released early.

Last September, however, Gov. Doug Ducey appointed Montgomery to the Arizona Supreme Court. And his replacement, Allister Adel, has told Capitol Media Services she is more receptive to the ideas of sentencing reform than her predecessor.

The issue also has brought together an unusual coalition.

On one hand there are organizations like Families Against Mandatory Minimums.

"We have seen programs like this be successful in other places in the country,'' said Molly Gill, vice president of policy for the organization which represents families of those who have been incarcerated.

"And what we know from our experiences with them is that people respond to incentives,'' she told lawmakers.

"None of us would probably work our jobs if we didn't receive some compensation,'' Gill said. "And there are many people in prison who, unfortunately, simply aren't going to be motivated to do some of this rehabilitative work without an incentive.''

Barry Aarons of the American Friends Service Committee said his organization also supports taking time off sentences for those who have earned the privilege of early release. But he said it's even more complex than that.

"We think that staying in prison longer if you are ready and prepared to return to society, become a productive member of society again, is contrary to the principles of rehabilitation,'' Aarons said.

But the measure also has drawn the support of conservative and business-oriented groups, like Americans for Prosperity, a national organization founded by the Koch brothers which pushes for lower taxes and less state regulation.

"The purpose of these reforms, I think we can all agree, is that society is first kept safe, prioritize our taxpayer dollars toward reducing recidivism and to focus our resources on those who are a threat to our society,'' testified Boaz Witbeck, the organization's deputy state director.

While the vote was unanimous, there was some dissent to one of the provisions.

Rep. John Allen, R-Scottsdale, insisted on an amendment to spell out that the simple fact of completing a literacy program, by itself, would not qualify an inmate for early release. That drew criticism from Rep. Jennifer Pawlik, D-Chandler.

"As a reading teacher I think that's the crux of so many issues,'' she said. "If you can't read, that makes life so much harder.''

Pawlik said there are inmates in prison who are reading at the third-grade level.

"If we can get them to the eighth-grade reading level they're going to have such a better life,'' she said.

"I don't disagree,'' Allen responded. But he said that if the state is to offer incentives to inmates to reduce their incarceration he wants to be sure these are meaningful.

But Allen, who chairs the committee, also made it clear that he would kill the entire proposal if the bill allowed literacy programs to count as a way of early release.

Voters may get some say on the issue of prison reform regardless of the fate of HB 2808.

The American Friends Service Committee is gathering signatures on a ballot initiative that would allow inmates sentenced for non-dangerous offenses to be released after serving 50 percent of the time.

The same initiative, if approved, would allow judges to disregard state laws setting out minimum prison terms in cases of "non-dangerous offenses'' when it is "in the interest of justice.'' And it would end the practice by some prosecutors of "stacking'' charges in a way that allows someone to be sentenced as a repeat offender even if they have no prior convictions.

Backers need 237,645 valid signatures on petitions by July 2 to put the issue on the November ballot.

Organization wants voters to decide on 'truth in sentencing' laws
My Turn: Sentencing reform: A solution in search of a problem
Advocates work to slow the revolving door of repeat prisoners
Ducey advocates convicts being able to 'buy down your time'
New early release program studied for state prisoners
Event Calendar