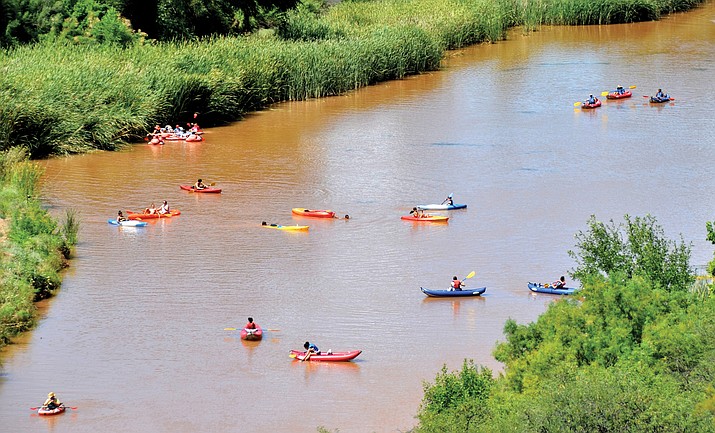 The Friends of the Verde River announced Tuesday its first “grade” of the river itself, with 16 entities contributing to an evaluation process. The overall score, which is meant to evaluate the overall health of the river, is 57 percent, or what’s being called a “C-plus” grade. VVN file/Vyto Starinskas

COTTONWOOD — The Friends of the Verde River released a “report card” Tuesday for the body of water and the watershed that is its focus.

The first Verde River Watershed Report Card was announced Tuesday in a news release, with the score meant to show the overall health of the river. The watershed earned an overall score of 57 percent, or a C-plus.

The entire report can be viewed at VerdeReportCard.org.

Water availability and quality scored the lowest while recreation topped the chart. The Nature Conservancy and Friends of the Verde River, with dozens of stakeholders and the University of Maryland Center for Environmental Science – have been working on this report for two years.

This is the first of its kind in the region and is a result of collective efforts of dozens of stakeholders in the Verde watershed.

“The Verde River is threatened by unrestricted groundwater pumping, diversions, degraded habitats and warmer, drier weather,” said Nancy Steele, executive director for Friends of the Verde River. “Our small towns are dependent on a healthy river for everything that’s important to us: drinking water, irrigation, and recreation. By working collaboratively, we can ensure the river keeps flowing and our communities continue to thrive.”

There are three major category scores: water was scored at 48 percent, with habitat at 54 percent and communities scoring the highest at 59 percent.

“I learned something very important during this journey,” said Kim Schonek, Verde River program director for The Nature Conservancy, in the news release. “We need to look at the watershed in a holistic way. It’s critical for us to think about how we can achieve conservation goals in concert with economic goals for the communities in the watershed – these include housing and recreation.”

The Verde River watershed stretches from Chino Valley to Phoenix, supplying drinking water to more than 3 million people in the metro area. The river also supports the Prescott and Verde Valley communities with drinking water, irrigation for food, and recreation, and boosts local economies.

Verde River baseflow — flow in the river during summer — scored poorly, at 38 percent, reflecting nearly 30 years of steady declines. Water quality received the lowest score of 19 percent, due, in part, to monitoring challenges.

The highest-scoring indicators were in the communities category. Both recreation access and visitor satisfaction had strong scores of 87 and 96 percent, respectively.

“Congress designated the Verde River and its tributary, Fossil Creek, as wild and scenic rivers - the only such designations in Arizona,” said Steve Chesterton, Wild & Scenic Rivers National Program Manager for the USDA Forest Service, in the release. “These waterways are incredible assets for present and future generations to enjoy. The report card process looked at the connection between these protected areas and the broader landscape to help identify stewardship opportunities of shared interest within the watershed going forward.”

The habitat category had mixed results. Upland habitat had a poor score (36 percent) and streamside birds had a good score (77). Habitat scores in the Verde are affected by many factors, including soil erosion, wildfire risk and the quality of trees and plants along the riverbanks.

The U.S. Forest Service provided significant project funding for the development of this Report Card to mark the 50th anniversary of the National Wild and Scenic Rivers Act.

The Nina Mason Pulliam Charitable Trust provided funding for this project as part of its ongoing investment in the Verde River to maintain flows and river quality. Based in Phoenix and Indianapolis, the trust helps people in need, protects animals and nature, and enriches community life.