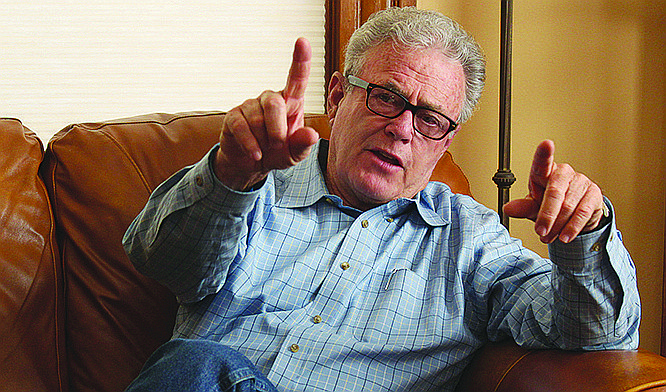 Rep. Noel Campbell, R-Prescott, shown here, along with Rep. Bob Thorpe, R-Flagstaff, are among the lawmakers who support a measure that would double the state's gasoline tax for the first time since 1991. HB 2899 was approved unanimously Wednesday by the House Transportation Committee. (Capitol Media Services/Howard Fischer file photo)

PHOENIX - State lawmakers took the first steps Wednesday to what could be a doubling of the state's gasoline tax.

HB 2899, approved by the House Transportation Committee on Wednesday on a 6-0 vote, would add six cents to the current 18-cent-a-gallon effective on July 1. That would go up an additional six cents every year until it hits 36 cents on July 1, 2023.

Potentially more significant, the measure being pushed by Rep. Noel Campbell, R-Prescott, is crafted so that the levy would increase annually to match inflation. That would preclude the need for future legislators to have to deal with the politically sensitive issue of voting for a tax hike.

Rep. Bob Thorpe, R-Flagstaff, said that's how Arizona got to the point where it is now, with road construction needs outstripping the available revenues because the current tax has not been increased since 1991.

"We haven't had members with the backbone to adjust this," he said.

But it's that inflation adjustment that is giving heartburn to the Arizona Petroleum Marketing Association which represents gasoline dealers. Lobbyist Mike Williams told lawmakers that if the 1991 legislation had an inflation index Arizona now would have the highest gasoline tax in the Western states.

Campbell is not limiting his plans to raise revenues to only hitting up drivers of gas-driven vehicles; it also addresses diesel fuel.

Potentially more significant, HB 2899 imposes new taxes on hybrids and all-electric vehicles on the basis that they, too, use the roads but, from Campbell's perspective, are not paying their fair share of construction and maintenance costs.

The move comes even as Gov. Doug Ducey has consistently said he does not believe the state needs additional gasoline taxes.

Campbell is counting on a rising public sentiment for better roads to not just get him the two-thirds margin he constitutionally needs in the Republican-controlled House and Senate for a tax hike but to convince the governor that there is broad support for the plan. He even got House Speaker Rusty Bowers, R-Mesa, to testify in favor.

And Tony Bradley, president of the Arizona Truckers Association, whose members will pick up a big share of that additional cost, added his voice.

He figured the delays for truckers due to traffic congestions currently are costing more than $800 million a year. By contrast, Bradley estimated, the legislation would raise an additional $640 million a year with the higher fuel taxes on everyone.

"This bill would save us by paying more,'' he said. "And we're willing to pay more.''

But gubernatorial press aide Patrick Ptak said after the hearing that Ducey's views have not changed.

One sweetener Campbell built in to encourage support is kind of a reverse voter veto.

It would require the state transportation board to come up with a plan to use the new revenues and have it updated every five years to show the progress that actually has been made.

That report would go to legislative leaders and committees to review. And Campbell said if they were dissatisfied with how the money is being spent they could put a measure on the ballot recommending that voters rescind the additional taxes.

"We know we're going to meet them because we've had testimony upon testimony of the areas that need improvement, the projects that need to be done,'' he said.

"We know what needs to be done in this state,'' Campbell said. "What we lack is the political will to do it."

Lobbyist Meghaen Dell'Artino said her client is not opposed to Tesla owners paying their fair share in taxes. But she believes that the formula for the levy, based on the electricity used, means they would be paying more than the owners of gasoline-powered vehicles.

Caryn Potter of the Southwest Energy Efficiency Project registered her own objections, saying that higher taxes on all-electric vehicles could discourage people from buying them. And that, she said, would harm the environment, particularly with some Arizona cities facing problems complying with ground-level ozone standards.