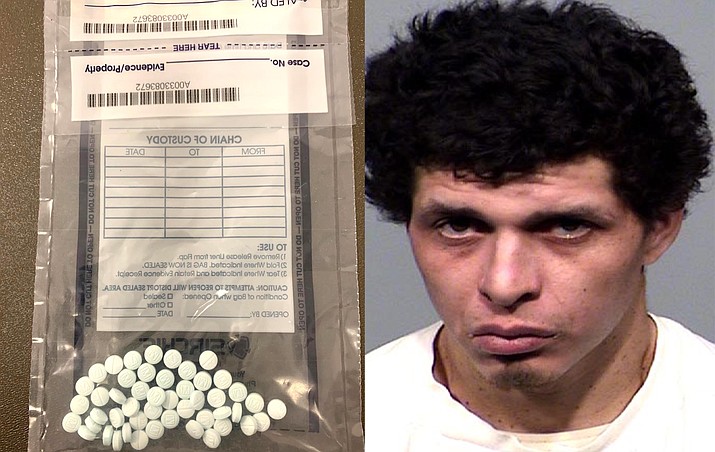 COTTONWOOD — At about 5:45 p.m. Saturday, Cottonwood police arrested a man and woman, both age 25, for possession of drug paraphernalia.

Conducting a traffic stop on a blue 2005 Chevrolet Avalanche for a traffic violation at 700 block of South Main Street, the officer noted “furtive movement in the vehicle with the two occupants,” according to a news release from Monica Kuhlt, professional standards sergeant with the Cottonwood Police Department.

“Once the occupants were contacted” the officer requested help from Officer Chris Dowell and his K-9 partner, Kratos.

According to the news release, Kratos “alerted to the Avalanche and it was searched.”

Officers located a container under the seat of the passenger, Clarkdale resident Raymond Rudy Newhall. The container contained 48 fentanyl pills.

The vehicle also contained paraphernalia “consistent with ingesting the pills – burnt aluminum foil in addition to an empty pen case and straw cut and modified into snort tubes,” the release stated.

Newhall was also arrested for possession of narcotic drugs for sale.

The driver, a Sedona resident, was arrested on a misdemeanor charge and also cited for driving on a suspended driver’s license. The couple’s 2-year-old son was also in the vehicle. He was turned over to family and the Department of Child Safety was contacted, the release stated.

Newhall was booked into the Yavapai County Detention Center for possession of narcotic drugs for sale and possession of drug paraphernalia. The Sedona woman was cited and released.