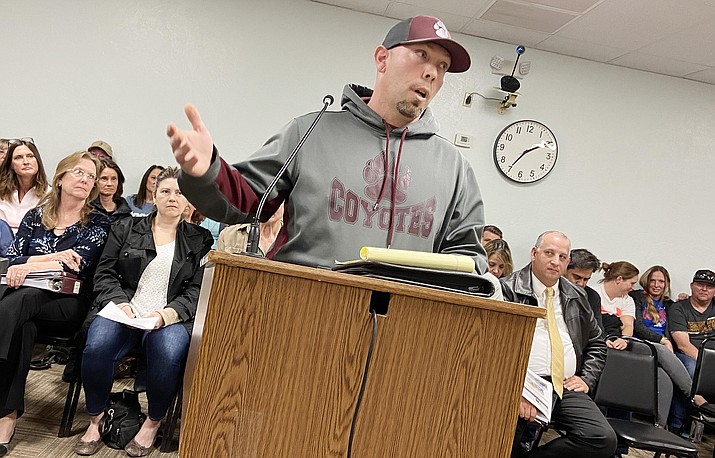 So did Council Member Bill LeBeau.

Wednesday, council agreed, as it voted unanimously to accept the $2.99 million low bid by Tierra Verde Builders for Phase 1B of the town’s sports complex, on State Route 260 east of the Verde Ranger Station.

In addition to accepting the base bid, council also said yes to Tierra Verde’s alternate bid to provide an additional baseball/softball field, for an additional $720K.

At a little more than $3.7 million, the project includes two football/soccer fields, each with under drainage, irrigation and controls, installation of lighting system, goal posts and scoreboards; and two baseball/softball fields with under drainage, irrigation, fencing, backstop, dugouts, installation of lighting system, and scoreboard.

What that means for Tanya Munday, is that there will be enough fields for children to play in Little League.

“It’s sad to tell a kid ‘sorry, you can’t play this year,’” she told council.

Jamie McKinley told council that “more than 200 kids are signed up for Little League.”

“It’s time. It’s been time. This is a youth community,” she said.

Council’s commitment Wednesday also assured that before the notice to proceed is issued, the town and Tierra Verde Builders will negotiate the original contract amount by value engineering.

“There’s numerous things we’re going to look at,” Long said. “I feel pretty good we can reduce the cost. I feel there are areas we can get some savings.”

With $3.1 million left in the town’s budget to cover the cost of the project, council agreed to secure additional funding so the town could consider adding items such as a maintenance facility and field maintenance equipment.

But that money could also come from “reserves, or other budgetary items,” Town Manager Russ Martin told council before its 7-to-0 vote.

“You won’t even spend the $3 million by July,” Martin said. “But you have to make a commitment to move forward.”

Council’s agenda, which includes bid results, and an explanation of alternates and value engineering options, can be found at cvaz.org.