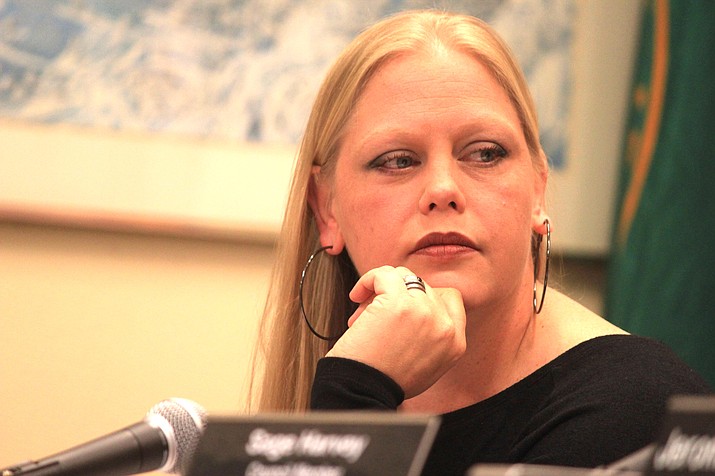 Mandy Worth, a member of the Jerome town council, said she and her colleagues are not opposed to short-term rentals. But she said the 2016 law eliminating local oversight has resulted in is driving out long-term residents who cannot find available housing. VVN file photo

PHOENIX -- State lawmakers are moving to undo some of the restrictions they placed on cities four years ago to regulate short-term rentals.

The House Government Committee approved a measure to let communities limit the number of people who can be allowed into these facilities to no more than two per bedroom. HB 2875 also permits cities to require installation of noise monitoring equipment, restrict where people can smoke and even require owners or their agent to actually meet the people to whom they are renting.

At the same time, the Senate Commerce Committee gave its own blessing to SB 1554. It contains not only some of what is in the House bill but adds some additional restrictions, like telling the owners of apartment complexes they cannot convert more than 25 percent of their units to short-term rentals.

The restrictions drew opposition from a parade of people who own these vacation rentals. They ranged from individuals who have just one or two properties they bought as investments to companies with multiple units, each telling lawmakers their own stories about how they got into the business.

Chante Fox said she and her husband bought and renovated multiple properties.

"We are managing our properties, we are there all the time, we followed the rules,'' she told lawmakers. And with her husband now in the hospital, paralyzed from the waist down, Fox said this is their only source of revenue.

"I'm desperate,'' she said. "It would take away a lot of what we built and what we worked so hard for the past couple of years.''

Mandy Worth, a member of the Jerome town council, said she and her colleagues are not opposed to short-term rentals. But she said the 2016 law eliminating local oversight has resulted in is driving out long-term residents who cannot find available housing.

"It's brought in corporate and large money people who are buying up houses, kicking people out,'' Worth said. "I currently have a Vietnam veteran who is sleeping on my couch because he was removed from his apartment to convert it to a short-term rental.''

The situation has gotten so bad, Worth said, that the tiny community is having problems finding people to work for the city or staff the volunteer fire department. And she said it's possible that the new census will find the population of the town has declined.

"So we now have a proliferation of neighborhood motels in our area that were not there before,'' he said. "You broke our neighborhoods and you're going to need to fix it.''

The crux of the debate is whose rights are at issue.

"You have property rights when you own a home,'' he told Capitol Media Services.

And Ducey said this is all part of promoting the state's business environment.

"We've allowed a lot of Arizonans to have an entrepreneurial energy and make money.''

He declined to say, however, what he would do if either bill reaches his desk.

But Sen. Tyler Pace, R-Mesa, who was not in the Legislature when the original bill was passed, suggested that perhaps the lawmakers at that time and the governor did not realize how large an effect the measure would have. He said if there had been a more "delicate'' approach to easing regulations at that time "we wouldn't be sitting here today'' trying to fix the problems created.

Rep. Isela Blanc, D-Tempe, said the issues with the 2016 law are even more basic than that.

"It was sold as this idea that if you own a second home or if you're a primary owner of a residence it was an opportunity for you to rent out your room or a space to help make ends meet,'' she said. Instead, Blanc said, it became an invitation for corporations to come in and buy up housing to convert to short-term rentals.

And she brushed aside complaints from those who own and operate these rentals that restricting what they can do improperly infringes on their rights.

"How is it that all of a sudden my property rights of owning my residence in the community where I have lived for 20-odds years suddenly has less value than that of a business owner?'' Blanc asked.

Rep. Walt Blackman, R-Snowflake, said his support for new oversight was based on a simple belief that the state should not be in the business of telling local governments how to handle purely local issues like housing.

"I have a real problem when (state) government is not letting local government do its job,'' he said.

Both measures face uncertain futures as they go to the full Senate and House, respectively, along with the possibility of a gubernatorial veto.