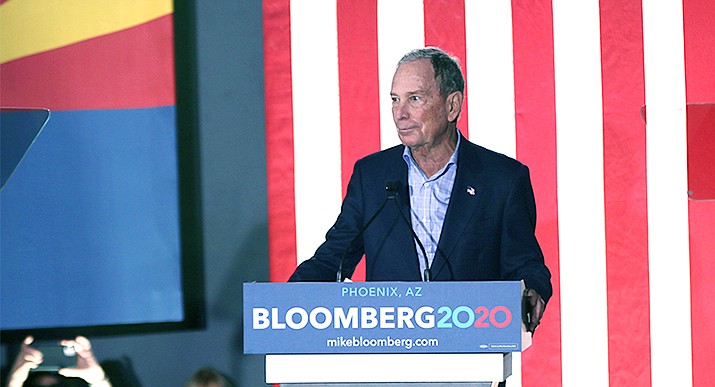 Democratic presidential hopeful Michael Bloomberg has said offensive comments he made about women in the past were spoken in jest. ABC News reports that at least 17 women have taken legal action alleging workplace sexual harassment at his company over the past 30 years. (Photo by Farah Eltohamy/Cronkite News)

“I’d like to talk about who we’re running against, a billionaire who calls women fat broads and horse-faced lesbians,” she said during the Democratic presidential debate in Las Vegas. “And no, I’m not talking about Donald Trump. I’m talking about Mayor Bloomberg.”

The quote blew up social media.

“That is horse feathers,” she said of the allegations. “I’ve known this man for 20 years, and he respects everybody. Michael Bloomberg is a man of complete and total integrity.”

Taylor, a former Wall Street executive and former New York State Superintendent of Banks, has shared a home with Bloomberg, 78, for nearly two decades, according to Business Insider. Since he announced his run for the White House, Taylor has made campaign stops across the country to explain why Bloomberg would make a good president, said the Washington Post, which described her as a “pioneering woman on Wall Street.”

Bloomberg has long battled accusations that he has made demeaning and vulgar statements toward women, and several gender discrimination lawsuits were filed against Bloomberg and his company, according to the Washington Post.

On Wednesday night, Warren called for Bloomberg to release his accusers from nondisclosure agreements and confidential settlements, which he has so far refused to do.

Last month, on ABC’s “The View,” Bloomberg said: “Did I ever tell a bawdy joke? Yeah, sure I did. And do I regret it? Yes. It’s embarrassing. … But, you know, that’s the way I grew up,” according to Reuters.

“He was an Eagle Scout, so that basically says everything about him,” she said. “Being an Eagle Scout, you’re all about integrity, honesty, hard work and giving back. And that’s who he is.”

Taylor spent Wednesday in Tempe visiting with ASU President Michael Crow. Their goal is to work together on education if Bloomberg wins the Democrat presidential primary and presidential election on Nov. 3. Taylor also met with women’s student organizations on ASU’s Tempe campus.

Crow noted he is not endorsing Bloomberg for president, but he said he is happy to work with Taylor if Bloomberg wins the race.

Taylor is certain Bloomberg will succeed on Election Day.

“Look out for November, because he’s going to be the president of the United States,” she said.