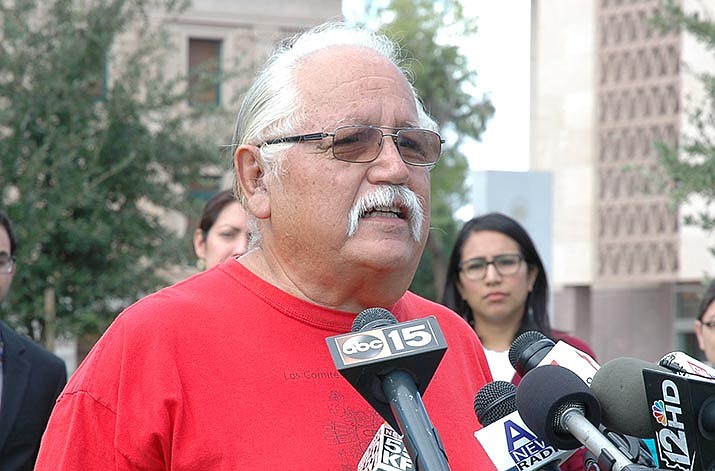 PHOENIX - Facing rising opposition and threats of a boycott, Gov. Doug Ducey has pulled the plug on his demand for a public vote for a constitutional ban on "sanctuary cities."

The decision late Thursday came just hours after the governor faced a series of questions from reporters about the potential fallout for the state. But it also appears that the divisive measure might not have the votes in the House, where Republicans hold a 31-29 edge: Rep. Tony Rivero, R-Peoria, has balked at voting on the plan without a more comprehensive answer to the issues of immigration.

Gubernatorial press aide Patrick Ptak said the decision not to proceed was made in consultation with both the Republican legislative leadership as well as Rep. T.J. Shope, R-Coolidge, who Ducey had tapped in his State of the State speech last month, to sponsor the proposal. But Ptak said that his boss remains convinced that the proposal does need to be part of the Arizona Constitution to preclude the kind of vote that occurred last fall in Tucson where residents considered -- and rejected -- a proposal to limit the cooperation of the city with federal immigration officials.

And House GOP spokesman Andrew Wilder said that, even with the death of HCR 2036, sanctuary cities remain illegal in Arizona because of SB 1070, a 2010 law aimed at illegal immigration.

It was precisely that point that caused at least part of the opposition to revisiting the whole issue, this time with what would be a high-profile and months'-long fight ahead of the November election.

There also was the possibility of a repeat of what became a public relations nightmare of sorts for the state after enactment of the 2010 law.

"For 10 years there's been peace and tranquility,'' immigration rights activist Sal Reza told Capitol Media Services on Thursday. "Then they go to put a ballot measure that's going to divide the state.''

What it will do, he said, is fire up the "Republican right-wing base.''

"The governor wants to be buddy-buddy with Donald Trump on the one hand and throw meat to the base,'' Reza said. "And he doesn't think of the consequences.''

And he there could be consequences.

There are clear parallels between the 2010 law and what Ducey unveiled in his State of the State speech.

That 2010 law requires police when possible to ask people their immigration status when they have been stopped for some other reason. It also forbids local communities from blocking their agencies and employees from refusing to work with Immigration and Customs Enforcement.

Ducey wanted to ask voters to take that second point, which already is law, and enshrine it into the Arizona Constitution. He said that's necessary to preclude future votes like the one in Tucson.

"We don't want sanctuary cities in Arizona,'' the governor said. "We're not going to import bad ideas from California,'' a reference to the fact that some communities there have adopted such policies.

In defending his plan earlier Thursday, Ducey brushed aside any comparisons with the 2010 law.

And the governor's not worried.

"I spent the first four years of my governorship promoting the state of Arizona,'' he said.

"Our reputation's never been better,'' Ducey continued. "Our relationship with Mexico's never been stronger.''

Reza, however, said, the governor would be wrong to think that will help Arizona weather any fallout from the debate on the sanctuary cities ballot measure.

"He thinks that because he has good relations with Mexico and they have a thriving economic exchange with Sonora that it's not going to affect the state in any way, shape or form,'' he said. But Reza said that won't shield the state from a ground-up reaction.

"Boycotts are usually initiated by the people themselves,'' he said.

"Last time, it wasn't the big wheels that boycotted the state,'' Reza said. "It was the people who decided not to come to Tucson anymore.''

That, in turn, ballooned into the broader boycott and lost conferences.

Ducey's decision may also have been helped along by questions of whether he would get the backing of the business community.

It was only after the 2010 law was approved -- and the state was hit with boycotts and lost visitors and conventions -- that Glenn Hamer, president of the Arizona Chamber of Commerce and Industry eventually came to the conclusion his organization should have taken a more active position in opposition to the 2010 law.

"What we did not see when (the 2010 law) was moving forward was the significant national and international reaction during a really difficult economic time in this state,'' Hamer said at the time.

On Thursday, before Ducey's decision was announced, Hamer expressed concerns.

"There is obviously a reaction here that has obviously attracted the attention of a number of prominent groups that we work with and have a lot of respect for,'' he told Capitol Media Services. And Hamer said that, given the state's history, "I would say it's fair to say we need to be extra, extra careful."

So is his organization supporting or opposing what Ducey wants to do?

"We are watching this very, very, very closely,'' he said.

Ducey, in speaking to reporters earlier in the day, said he did not see his measure as having potential harm to the state.

"I think what would hurt the state's reputation is sanctuary cities, which people have tried to put on the ballot," he said.

"The state's reputation is just fine," Ducey continued. "We got people moving here by the hundreds every day."