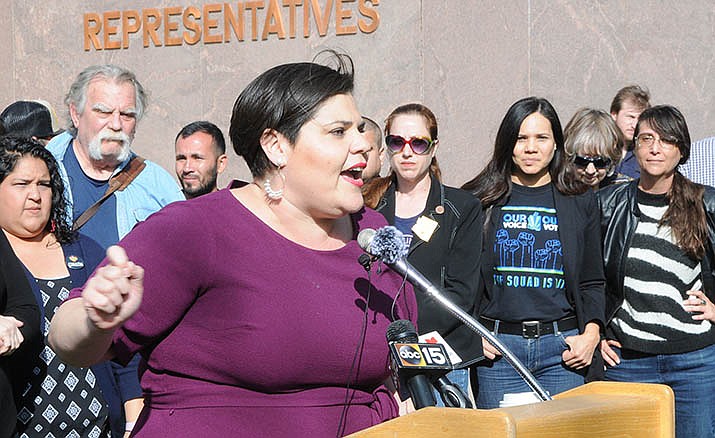 PHOENIX - Friday, Hispanic activists and their Democrat allies celebrated the death of a proposed constitutional ban on "sanctuary cities," as Republican Gov. Doug Ducey who had crafted the plan sought to do damage control.

The rally at the Capitol came several hours after the governor effectively conceded that he was having trouble getting support for the proposal that he had touted just a month earlier at his State of the State address.

"With any policy, the stars need to align to get it done,'' Daniel Scarpinato, the governor's chief of staff, told Capitol Media Services. "And on this, we just came to the conclusion the stars weren't aligning.''

In fact, some of Ducey's strongest allies were telling him to pull the plug.

Those "concerns'' were directly related to the fallout a decade ago after the Republican-controlled Legislature approved SB 1070, the divisive law that sought to target those not in the country legally. That resulted in not just some adverse national publicity but also a sharp drop in the number of visitors and conventions.

"I think part of leadership is listening," Scarpinato said. "And the governor listened."

On Friday, those organizations breathed a sigh of relief.

Greater Phoenix Leadership, for example, sent a message thanking the governor and Rep. T.J. Shope, R-Coolidge, who had agreed to carry the measure, for "putting Arizona first and no longer advancing the sanctuary city ban referral."

And Glenn Hamer, president of the Arizona Chamber of Commerce and Industry, praised Ducey's "prudent leadership'' which he said fits in with the governor's desire for Arizona to have a "welcoming business environment and its excellent relationship with Mexico.''

At the same time, Scarpinato acknowledged that the push that his boss had hatched probably wasn't really necessary.

He said there already are provisions in SB 1070 that effectively mirror what Ducey wanted to take to the ballot. These involve barring local governments from refusing to share information or collaborate with the federal government in determining whether someone is in this country illegally.

The only thing this proposal would have gained is to enshrine that verbiage in the Arizona Constitution, effectively precluding any city from adopting such policies. But as Scarpinato pointed out, voters in the one city to try that -- Tucson -- rejected it last fall by a 70-30 margin.

Democrats, however, saw something a bit more politically sinister in Ducey's proposal.

From the moment he introduced it last month, they said it was designed less to make a substantive change in Arizona law and more to put something on the November ballot to bring out the Republican base.

And once at the polls, they would vote to reelect President Trump and provide support to keep Martha McSally in the Senate seat to which she was appointed last year by the governor.

Scarpinato denied that was ever the goal.

"This was something that we felt was good policy," he said, designed to keep "bad California ideas" out of Arizona, a reference to the fact that some communities in that state had declared themselves sanctuary cities.

But what happened instead is that the issue fired up Hispanic groups - and in a very visible way.

Many showed up to testify against the measure when it was heard more than a week ago in the Senate Judiciary Committee.

That meeting devolved into a shouting match, of sorts, after Sen. Eddie Farnsworth, R-Gilbert, told Capitol police to remove one person who had called the measure racist, and then cut off further testimony.

The raw feelings carried over earlier this week into a House committee hearing legislation on voting laws that some also argued was targeting Hispanics.

And there, too, Rep. Kelly Townsend, R-Mesa, cut off testimony and had people ejected.

At the same time, groups like Living United for Change in Arizona as well as legislative Democrats were working the phones, reaching out to business groups to pressure the governor to yank the plan.

She said it reflects the realization of the Hispanic community in the wake of SB 1070 that it needed to be more politically involved. And Teran said what happened is just the latest string of victories for the energized community.

It started, she said, with organizing the 2011 recall of Senate President Russell Pearce, the Mesa Republican who was the architect of SB 1070.

"In 2016 we ousted (Maricopa County Sheriff Joe) Arpaio who implemented the legislation that came out of the state Capitol,'' turning out enough votes in the heavy Republican county to instead elect Democrat Paul Penzone.

That same year LUChA led the successful fight to increase the minimum wage from $8.05 an hour to $12 an hour now.

And then there was the defeat in 2018 of four Republican House members to cut the GOP edge to its current 31-29 margin.

"That's a win for our community," Teran said.

And 2018 was a good year overall for Democrats who, after years of holding no statewide office, managed to get their candidates elected to secretary of state, state schools chief and a seat on the Arizona Corporation Commission.

Tomas Robles, co-executive director of LUChA, told Capitol Media Services he thinks this will be the last time the Hispanic community needs to fight measures like this. But the key to that is whether this could be the last year that Republicans control both the House and Senate.

"The voters have a say in who gets to represent them in here,'' he said while standing in front of the Capitol. "And we believe that in 2022 (the next opportunity to put issues on the ballot) it will look different than it is now."