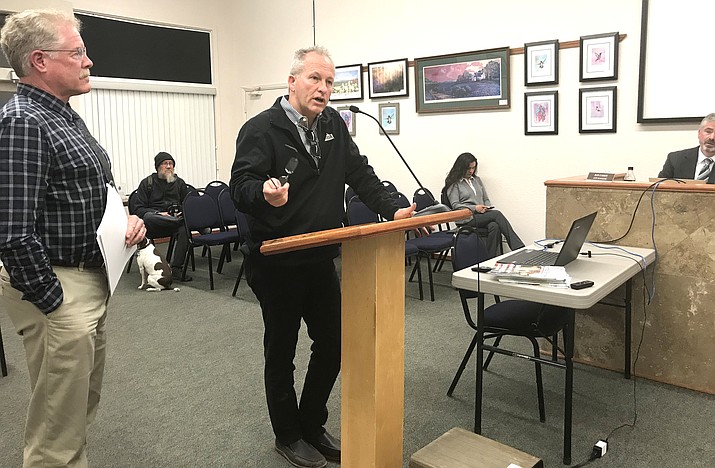 Sunridge Hotel Group President Brian Welker speaks to the Cottonwood Council Tuesday. The Council approved, by a 5-2 vote, the free use of fenced-in land for construction storage. VVN/Jason W. Brooks

An 85-room SpringHill Suites by Marriott is set to be built on 2.2 acres at Sixth Street and West State Route 89A, with SunRidge Properties leaders back in Cottonwood on Tuesday for approval of the use of the additional 1.6 acres temporarily during construction.

However, Henry, citing the appearance of a gift of public property, opposed allowing SunRidge and its development company — SanTan Hotel Properties, LLC — use of construction staging property for free.

The use of the 1.6 staging acres, at no charge, was approved by a 5-2 vote, with Henry and Jauregui voting against it. Henry said she felt the city already made a “giant concession” in selling only 2.2 acres for about $385,000, which she voted to approve in January, though she understands it was tough for the city to find a buyer for all or part of the 3.8 total acreage.

“I am still concerned that we’re gifting use of a huge piece of land,” Henry said.

Sunridge Hotel Group President Brian Welker said he hopes construction can began by August of this year, with completion sometime in the fall of 2021.

He said it’s common for landowners — which are typically companies or individuals, as opposed to municipalities — to allow excess land to be used for staging at no charge. He cited his company’s recent projects in La Quinta, Calif., and Colorado Springs as examples where adjacent acreage was used for construction staging at no extra charge.

Mayor Tim Elinski, at first, apologized to Welker and his associates having to come up from the greater Phoenix area to Cottonwood for an approval he called “routine.”

After Henry raised an objection, Elinski pointed out that the hotel will likely improve the value of what will still be a vacant 1.6 acres, with the entire parcel of about 3.8 acres having gone unused for many years.

“Also, we can still actively market that 1.6 acres, starting next spring,” Corbin said. “And when the hotel starts to go vertical, that will make it look more attractive to a developer that would want to put in something like a restaurant next door to a hotel. That 1.6 acres will have direct access to Sixth Street.”

Corbin told the Verde Independent that neither SanRidge nor any potential buyer of the other 1.6 acres need be concerned about the detailed Arizona Department of Transportation regulations or procedures in access to State Route 89A, which is already managed through the traffic signal at Sixth Street.

Henry and Elinski both implored Corbin and anyone involved with city real estate to use local title, escrow and other service companies, when possible.

At the Jan. 21 meeting, after the Council emerged from a 15-minute executive session about the purchase, Welker told the Council that the company would withdraw its request to waive fees, which will added up to an estimated total of more than $90,000.

That doesn’t include to-be-determined water and wastewater capacity fees, which could approach $200,000. The total cost to Sunridge, an Arizona-based company that has built Marriott-brand hotels in several southwestern states, will be about $11 million.