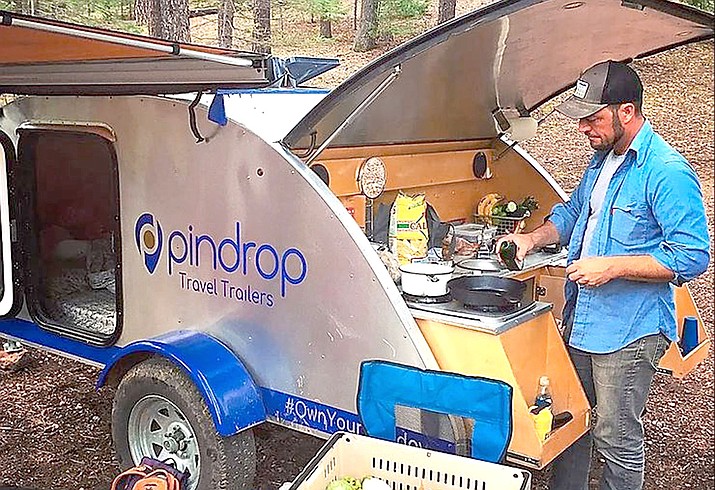 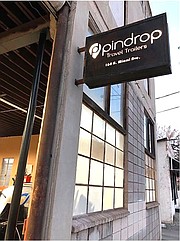 But the mayor, who is up for re-election in August, said he has no intention of moving from Cottonwood even though he is changing professions.

Elinski has been working a general contractor for the past 20 years, but now he has decided to try something different.

In a former boarding house/saloon/bordello building, which he has owned in the Miami/Globe area for six years, Elinski is producing a high-tech travel trailer that is built of quality products and parts.

The mayor said he chose Miami for his small trailer workshop because he already owned the building for almost six years. Elinski said he was using the building for his state-wide construction business. He was also doing lot of work in the area. Thus, purchasing the commercial space at the time in Miami made sense, he said.

“We looked around up here, but things were kind of out of our league,” Elinski said, referring to property costs in the Cottonwood area.

His Miami building was built in 1915. It was a shell, pretty rough and needed a lot of work, Elinski said.

His new career focus won’t take any more time away from his mayoral duties than his career as a licensed historic restoration contractor did, he said.

It’s been a little awkward with people asking him if he is moving Miami.  “No, of course not,” Elinski said. “I am 100 percent committed to Cottonwood,” he said.

As mayor, Elinski is required to reside in the city, even though he does have to get permission from the council when he is out of town for more than three weeks, he said.

Elinski said he has worked out of the area for 20 years, but said the Pin Drop Trailers will take him out-of-town for less time than his general construction work.

He has no other staff right now. He plans to work two solid days a few times a month on the trailers.

Elinski said it wasn’t so much Miami-vs.-Cottonwood for a site for his business workshop. It was that he found the “right” property.

“We got really lucky,” Elinski said.

The building needed major renovations. “It was a mess. The upstairs was frightening,” he added. The structure was solid, but it needed a lot of work.

The mayor said Cottonwood is right for manufacturing, and he said his company will have to “scale-up” at some point. They will be looking at Cottonwood when they outgrow their current facility as the Miami site is not set up for large production, he pointed out.

“Cottonwood’s a natural place for me to scale-up,” he said. It’s where he spends most of his time as mayor, husband and father of two girls.

His wife, Ruth Ellen, a business analyst at the Yavapai College’s Small Business Development Center, does the marketing and social media for the Pin Drop Trailers.

Elinski said the only problem with this arrangement is that she is doing too good of a job. He said the word is getting out about their great product, but he can’t build the trailers fast enough.

Elinski said if he were to expand to Cottonwood someday, there are a number of places to look. The airpark is a natural place, but he also likes to renovate old buildings.  “We’ll have to cross that bridge when we get there.”

Elinski said he has retired from general construction, but has maintained his general contractor’s license and HVAC license.

So now he will continue primarily doing air conditioning and heating work and run down to Miami a few times a month to build a trailer.

The trailers are an alternative to large bulky RVs that require hookups. “It’s the answer to the consumer campers.”

Elinski has only built one prototype trailer thus far and is working on his second trailer which will have all the “bells and whistles,” he said.

Elinski said he plans to build about one per month and they will run from $16,500 to $23,000.  However, to get people interested, he plans to build three trailers that will be available for rent in the Verde Valley soon.

“I really enjoy building them,” Elinski said, adding that he was cramming everything “I’ve ever studied in one teeny, tiny shell.” He said it is challenging but fun.

When he built the first prototype in 2018, he didn’t realize how much he would enjoy camping in the trailer.

The trailer got its first test run during a family vacation to Montana. “I got a lot of positive reactions,” Elinski said.

Elinski said people have been making tear-drop trailers for 80 years, but his are 100-percent solar-powered. “You don’t need to plug it in ever,” he said. So you don’t need RV hookup for power. It has everything a person needs in it, he added.

People can charge their laptops or grind coffee, he pointed out.

It doesn’t have heat or air conditioning, but it really doesn’t need it, he said. It has residential-grade insulation and fans and doors on each side that allows airflow to cool. “It’s a tight little shell.”

The trailers are an alternative to the RVs for people who want to be untethered, don’t want the noise of generators and want to have a peaceful camp.

He said it has taken two years to get certifications, but still needs to get ADOT certification since it’s a road vehicle and needs a VIN.

Customers should check their manufacturer’s towing capacity, but Elinski said he recommends a six-cylinder vehicle to pull the trailers in this area, especially when loaded with drinking water and things like kayaks. The trailers can have roof-racks, awning and shower enclosure options.

The current model is called a 1,800-pound Fina Roma and comes in three-price point options, from basic to fully-loaded, he said.

Elinski is getting a trailer ready for a trade show in March and then will have three available for rental units in the Verde Valley. “And then we will be taking orders from people who want to buy one.”

Starting a new business takes a new mental focus, Elinski said, but it won’t take more time away from Cottonwood than his previous job as a general contractor.

“The most important thing, obviously, is finding time for my family,” he said.