Not ‘just a bunch of meathead workouts’: Players descend upon Arizona to prepare for NFL combine 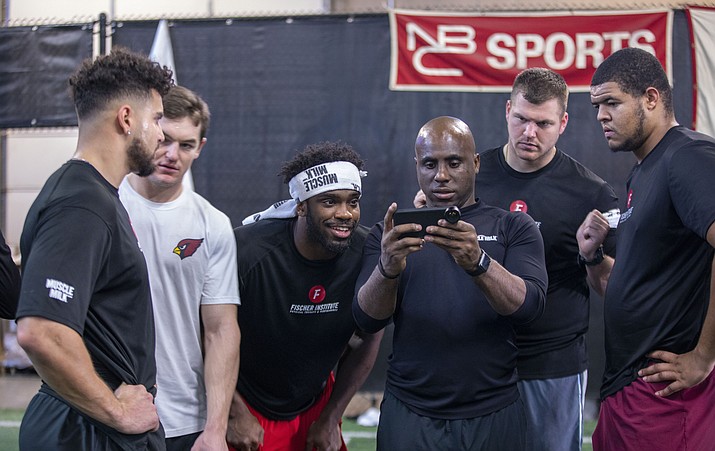 Athletes training for the 2020 NFL combine in Indianapolis review footage with trainer Dwight Pete at the Fischer Institute. (Photo by Travis Whittaker/Cronkite News)

PHOENIX – The NFL scouting combine is known to be all about numbers and measurables. How high can you jump? How fast can you run? What’s your 40 time, and can you maneuver through a collection of cones?

Most important: How will all your numbers stack up against your peers?

Those answers are often found at the NFL’s annual scouting combine that starts Sunday in Indianapolis. To help make their case, a collection of college football players have descended upon the Valley of the Sun for combine-specific training.

“We go through interview prep, and we go through the Wonderlic training,” former Purdue linebacker Markus Bailey said about the group intelligence test that is administered “We do yoga, we work mobility. It’s not just doing a bunch of meathead workouts. We’re doing things that are actually applicable, and functional movements.”

The combine will rarely make or break a player’s draft stock, but it can play a pivotal role in a player being drafted higher or lower than his college career initially suggests. Of course, the higher someone is drafted, the more money required to be in a rookie contract.

For Bailey, many of the workouts are not that different from what he already had been doing at Purdue. But he wanted to find a place that would not only focus its efforts on professional preparation but ways that he can best prepare himself for the next step of his football career.

One of those places is where Bailey ended up, at the Fischer Institute of Physical Therapy and Performance, a division of Spooner Physical Therapy, in Phoenix. Other popular facilities to help athletes prepare include EXOS in Phoenix and Triple Threat Performance in Tempe.

“(Founding owner) Brett Fischer does a great job of making programs specifically tailored to the athlete,” Bailey said. “My program and my exercises will be different than somebody else, even if we have the same injury, or body type, or whatever.”

Bailey knows this firsthand, as he’s joined in his training sessions by fellow Division I players in North Carolina A&T defensive lineman Justin Cates, Florida State offensive lineman Ryan Roberts and Southern Mississippi defensive lineman Drake Dorbeck. For all of them, it’s about making the most of every day until the NFL scouting combine begins.

Tim Spooner, the new co-owner of the facility who recently purchased the Fischer Institute to add onto his physical therapy business’s 22 other locations in the Valley, believes the company’s core philosophies line up with the holistic preparation these athletes seek.

“We don’t take care of a knee. We take care of a person who has a knee,” Spooner said. “When you take a mind, body, spirit approach, that’s what you’re doing. The physiology, that’s the easy part. The fact that that athlete is away from his team, that’s a different feel.”

This, Spooner says, is where getting to know athletes on a personal level plays a big role in them having the beneficial, holistic experience they look for to help them move their careers forward.

“The first thing is setting up the atmosphere,” Spooner said. “The athlete knows this is a place they feel comfortable, they can get better. We need to get to know them, their needs, what they are desiring to get out of this environment. We have to set goals with them, so you’re getting to know them as a person.”

Leading this effort is Dwight Pete, who is in his first year overseeing the pre-combine training program after being the lead trainer for about the past three years, and having been part of Fischer’s program since 2012.

He believes that for athletes who are looking more for holistic training, this program will always serve as a good match because the one-on-one attention is the first step in properly training this way.

“You’re not just some number here, run these drills and then go home,” Pete said. “We actually spend a lot of time trying to get to know the person, giving them treatment, making sure their body is recovered, restored from the long seasons that they experienced for the last four years. We have to try to bring them back together in eight weeks.”

It’s one of the difficult aspects of this program, to customize plans for each athlete and to spend the time together to do it well. The athletes also receive nutritional coaching, blood work and mental-performance training.

“Everyone has a different tune with their body,” Pete said. “The guys who come in who are more educated on how their body works, those are the guys who can progress a lot faster. Once we get them back into a mobility standpoint, then they’re able to start unlocking some of their great attributes, and then they start seeing their progress.”

Even if each athlete has specifically designed exercises, being able to train with others working towards the same goal has strong benefits as well.

“By nature, football players are competitors,” Bailey said. “When you have guys going through the same process and having the same goals as you, it kind of makes the experience better or more enjoyable overall.

“There’s only a few of us here, but we’ve gotten close, and we’ve been able to push each other, bring the best out of each other.”

The players did not find the Fischer Institute by dumb luck, as it has produced nine first-round draft picks since it opened in 1997, including Darrelle Revis (Jets), Roddy White (Falcons) and Lane Johnson (Eagles).

In all likelihood, first-round selections may prove to be an unrealistic goal for this group, but they remain hopeful that their training in Phoenix will help them move up the draft board.