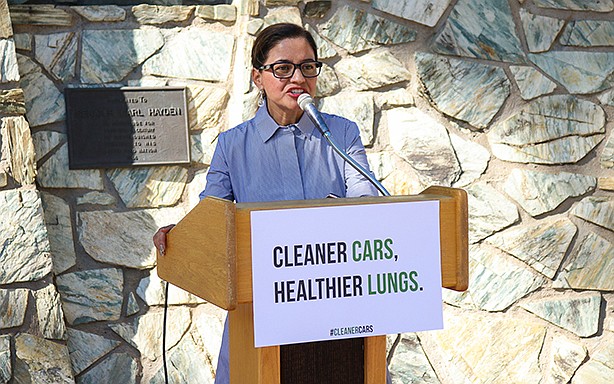 PHOENIX - Anyone seeking to borrow money from a pawnbroker could soon end up having to pay more.

On a party-line vote Wednesday the state House agreed to set the maximum interest and fees at 20 percent per month, the equivalent of 240 percent annually. That compares with current law setting the cap at 13 percent for the first month and 11 percent for each subsequent month.

The vote came despite the objections of several Democrats who said the government has a role in protecting consumers. Rep. Isela Blanc, D-Tempe, said the interest rate amounts to "predatory lending."

But Rep. Anthony Kern, R-Glendale, who crafted the measure, said the measure is "consumer-friendly.'' He said HB 2240 is designed to promote transparency.

Kern said it requires that consumers be made aware of the interest rates that a particular shop is charging so they know what it will cost to retrieve the item. And it permits someone to pick up the item that was pawned within 24 hours simply by repaying the amount loaned, with no interest charged.

He said he crafted the bill after meeting with owners and operators of various pawn shops, both large and "mom and pop'' outlets. And Kern conceded that he never actually met with any consumer groups.

But he said that doesn't make the measure unfair. In essence, Kern said, it recognizes that this is a legitimate way for people to borrow money.

"So if there's a market, who am I to stop someone from taking an item out of their home, bringing it to a pawnshop and trying to get some cash they may need to pay for food or gas or a car payment or a mortgage payment?'' he asked.

Blanc said she sees the issue through a different lens.

"Is it not our role as a state agency to protect consumers from paying high interest?'' she asked.

"It is our business to protect consumers, absolutely,'' Kern responded. "But on the flip side of that, the free market will dictate what that interest rate will be.''

The bottom line, he said, is people are free to shop around and find a shop that possibly charges less than another one. Kern called the bill "free market reform in a free market society."

Blanc argued that Arizonans have told lawmakers they do want caps on interest rates.

In 2008, voters decided to kill off the payday loan industry, which charged annual interest rates in excess of 400 percent, despite lenders spending more than $17 million on the campaign to keep it alive.

But Rep. Mark Finchem, R-Oro Valley, said the bottom line is that no one is forced to do business with a pawnshop.

"We've got to remember this is a free-will decision they enter into,'' he said. "Just because it's available does 't mean it's predatory.''